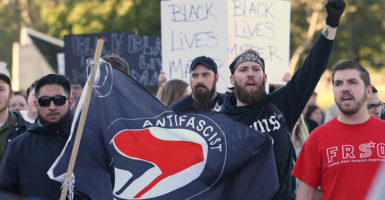 Protesters with the radical group Antifa demonstrate Sept. 27, 2017, against an appearance by conservative commentator Ben Shapiro on the University of Utah campus in Salt Lake City. (Photo: George Frey/Getty Images)

Wisconsin lawmakers are taking the issue of free speech on campus seriously again—and, inexplicably, that has some people upset.

Legislators recently advanced a proposal based on the commonsense idea that anyone “lawfully present on campus may protest or demonstrate,” as long as they do not interfere with someone else’s ability to do the same.

The idea has bounced around the Capitol in Madison for three years while lawmakers in Alabama, Arizona, Georgia, and North Carolina have adopted similar solutions to protecting free expression.

And yet, despite provisions in the proposal that protect students and faculty on both sides of ideological debates, critics are mustering a series of unserious objections.

One Wisconsin lawmaker called the proposal “an unnecessary repetition of the U.S. Constitution.” But there’s ample evidence that legislators should remind Wisconsin students and administrators of the First Amendment.

In 2016, disruptive protesters tried to block political commentator Ben Shapiro’s speech at the University of Wisconsin at Madison, at one point forming a wall in front of the podium.

The student newspaper quoted some attendees who agreed with Shapiro and others who did not—but the comments generally showed an appreciation for the chance to hear ideas rarely presented on campus.

In 2018, campus security at Northeast Wisconsin Technical College stopped Polly Olsen, a student, from handing out Valentine’s Day cards that said “Jesus Loves You.” The campus police said Olsen was engaged in “suspicious activity” and told her that she was “soliciting” on campus outside of a free-speech zone. No word yet on what customers were buying.

Another opponent of the proposal called it “a partisan waste of time.” However, the Wisconsin university regents are operating under rules similar to the legislative proposal, and the policies have allowed students with different political views to express their opinions.

In 2017, students invited Townhall.com editor Katie Pavlich to speak on the right to bear arms. Protesters gathered to demonstrate and told The Daily Cardinal that they were not going to shout Pavlich down because of the regents’ recent decision to consider consequences, including possible suspension or expulsion, for disruptive students.

As a result, the protesters held their demonstration and were quoted in the paper, and Pavlich finished her talk. That’s how groups are supposed to hold a civil exchange of ideas.

The threats to free speech on campus in Wisconsin are real, and Badger State students are not alone. At the same time as the Pavlich incident, the executive director of the American Civil Liberties Union was prepared to deliver remarks at the College of William & Mary in Virginia. As she started to speak, Black Lives Matter protesters shouted her down, ending the event.

Earlier in 2017, students chased a self-described progressive professor at Evergreen State College in Washington state into hiding after speaking his mind about campus policies. The entire campus had to shut down to restore order.

The current proposal is not creating the idea that students could ever face discipline, but specifying that the disruptive and violent actions involved in shout-downs are behaviors that warrant review and could lead to sanction.

In a recent survey of University of North Carolina students, conservative students reported that they kept their ideas to themselves more often than their peers. A 2018 survey of students at California’s Pomona College found similar results. Such self-censorship prevents everyone on campus from asking hard questions and pursuing truth, a central part of the college experience.

By trying to protect free speech on campus, Wisconsin lawmakers are performing a service for individuals on both sides of the aisle. Lawmakers should seize the opportunity to be nonpartisan and guard free expression in the state university system.