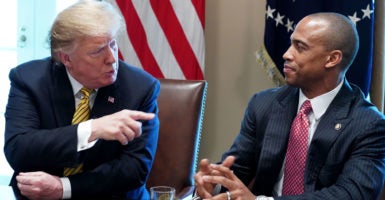 Entrepreneurs have been unleashed inside blighted communities to bring economic opportunity where it is needed most, thanks to President Donald Trump’s deregulation and revitalization initiatives, administration officials said Friday.

Scott Turner, executive director of the White House Opportunity and Revitalization Council, discussed such progress with Andrew Wheeler, administrator of the Environmental Protection Agency, during a conference of conservative activists near Washington.

Turner, a former pro football player, told the audience at the Conservative Political Action Conference that opportunity zones created during the Trump administration are bringing “stakeholders” back into “stressed communities” for the first time in decades.

“Poverty has no color, poverty has no party,” Turner said. “Poverty affects all of us and when you’re in poverty, you don’t care about party.”

A total of 8,764 opportunity zones have been identified in economically depressed areas throughout the country, according to government figures. Opportunity zones, created as part of the Tax Cuts and Jobs Act that Trump signed into law in December 2017, give investors tax benefits in exchange for providing capital in such neighborhoods.

The zones have both an economic and social impact, Turner said, in places where 35 million Americans live.

“Opportunity zones are bringing long-term sustainability,” he said. “Our vision is for generational impact on our country. Conversations are changing around the table with families, and when conversations change, this brings generational change.”

“We had a lot of regulations stopping opportunity throughout the country,” Wheeler said. “President Trump cares about the forgotten Americans. We have invested in cleanup efforts at brownfield sites, and when we clean up these then the private sector comes in. We have also taken out 51 regulations, saving the American people $6.5 billion.”

The EPA’s Brownfields Program offers grants and other assistance to communities that want to clean up and restore contaminated areas.

“We don’t want blighted blocks and blighted city buildings,” Wheeler said. “We want to make sure environmental standards are met and these [sites] are being redeveloped and repurposed.”

Wheeler also discussed a new program under the Clean Air Act that works to the benefit of communities that have had difficulty coming into compliance with EPA standards.

“We moved 38 communities from nonobtainment [of environmental standards] to obtainment,” he said. “We are lifting regulations so they can attract new business.”

The environment “is cleaner today than it has ever been,” the EPA chief said.

Turner credited Wheeler and Trump for progress on both environmental and economic fronts.

“People need to understand this is a business-minded administration and business-minded EPA leader,” Turner said. “He’s clearing the way for businesses to come into areas where they haven’t been.”

Jones said he has crisscrossed the country to inform minority communities that “the calvary is coming” under the Trump administration, offering new opportunities so local residents can achieve their potential.

Wheeler also took the opportunity to highlight the Trump administration’s efforts to bring greater transparency and accountability to the EPA’s regulatory practices, saying:

EPA guidance documents will be available to the public for the first time. We are also bringing transparency to science, which is something the media beats me up for. But if we use a scientific study to justify a regulation, that has to be made available to the public. The American public needs to see what their tax dollars are buying.