Trump a Pragmatist and Washington Had to ‘Adapt,’ Kushner Says 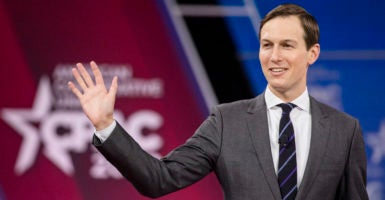 "Most people don’t like Washington, so they like the fact that he’s fighting Washington," Jared Kushner, senior adviser to President Donald Trump, says of his father-in law in an appearance Friday at the Conservative Political Action Conference in National Harbor, Maryland. (Photo: Samuel Corum/Getty Images)

President Donald Trump has “grown and grown” in popularity over the course of three years in office because he has taken on Washington, son-in-law and adviser Jared Kushner told conservative activists Friday.

“He didn’t adapt to Washington. Washington adapted to him,” Kushner told the annual Conservative Political Action Conference just outside Washington, prompting a huge round of applause.

The president, his son-in-law added, is a “pragmatist.”

Kushner said Trump did not come to Washington to score political points. Instead, he said, “This is an action president.”

“When he was elected, his favorability rating was 37% on Election Day, according to Real Clear Politics polling. Now it’s up to 46%,” Kushner said. “When people see Washington fighting against him, most people don’t like Washington so they like the fact that he’s fighting Washington.”

The president has followed a clear model, he said.

“Tell people what you’re going to do, do it, and tell them you did it,” Kushner said.

The president’s senior adviser noted that the economy is expanding and the job market is growing because of Trump’s commitment to lower taxes and deregulation.

“The president’s ideology, as I see it, is a pragmatist,” Kushner said. “What I find every day is, people talk about things as one way or the other. We have people who are ideologues. The president is more of a pragmatist. He’s looking to bring the better idea.”