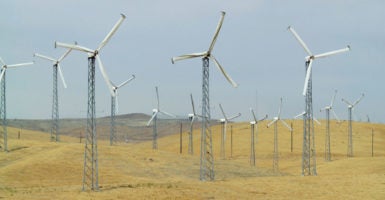 Congress needs to consider an energy bill that does exactly the opposite of the American Energy Innovation Act. Pictured: a wind farm in California. (Photo: Gianni Oliva/DEA/Getty Images)

When you think of the word “innovation,” what comes to mind?

Maybe it’s something new and inventive—or something cutting edge, original, and creative.

Or, if you’re in Washington, “innovation” is trotting out the same, stale approaches to policy that have done less to empower innovators and families and more to empower special interests.

The latest case in point is a 555-page energy bill introduced in the Senate. The majority of provisions in the so-called American Energy Innovation Act are not something that would spur American energy innovation, nor is it innovative thinking when it comes to promoting sound public policy.

In fact, large chunks of the bill are amending or expanding existing programs.

The Energy Policy Act of 2005 extended economic privilege to favored energy technologies, erected barriers to entry for those that didn’t receive them, and wasted taxpayer resources in the process.

These interventionist policies put Congress and Department of Energy bureaucrats—rather than investors and customers—in the position of narrowing the field of competition between the many energy technologies being perfected in the U.S. right now to win customers. That cannot help but narrow the scope of innovation.

Some of the more egregious provisions in the American Energy Innovation Act include:

—Preferential treatment for various energy sources. In one form or another, the bill provides programs to boost wind, solar, geothermal, hydropower, carbon capture, nuclear, and energy-storage technologies. Carve-outs might buy support from specific industries, but they don’t benefit energy consumers or taxpayers. While subsidies might spur some amount of commercial activity, it’s limited only to what is subsidized.

The market for energy, whether it’s to light and heat our homes or to get to work every day, is a massive one. In the U.S. alone, consumers spent over $1 trillion on energy, and global investment reached $1.8 trillion.

Any of these technologies that can capture a sliver of that market won’t need the taxpayers’ help. Rather than propping up a few projects, if Congress wants American energy companies to innovate more, it should break down government-imposed barriers that prevent them from doing so.

—Subsidized and mandated energy efficiency. The bill includes a number of provisions to expand the government’s role in promoting energy efficiency, such as expanding eligibility for existing programs, adding new programs, and increasing government spending through grants and rebate programs.

Energy-efficiency spending programs and related legislation have enjoyed bipartisan support because politicians view such spending as a “win-win” proposition that will save consumers money and reduce emissions.

But families and businesses don’t need government mandates, rebate programs, or spending initiatives to be more efficient. They have that choice and can make those investments on their own.

When they don’t, it’s not because they’re acting irrationally, but because they have other preferences or budget constraints to consider. The market and price signals sort those preferences out. Government meddling merely distorts these decisions.

—Government involvement in activities best left for the private sector. Beyond the subsidies for specific energy technologies, the legislation would further embed industry with government through workforce-training programs and public-private partnerships. For instance, the bill would support jobs training, scholarships, and apprenticeship programs for nuclear power, renewable energy, energy efficiency, and grid modernization.

Additionally, government programs aim to improve the efficiency and sustainability of industrial and manufacturing processes and other processes that “can increase the efficiency of, and reduce petroleum use in, passenger and commercial vehicles.”

At face value, these initiatives may sound benign, but why do we need to spend taxpayer resources on them?

Automakers, for instance, understand that consumers value fuel efficiency and find ways to reduce petroleum use in vehicles without any mandate or government program in place.

For example, with the workforce training programs in the 2009 American Reinvestment and Recovery Act (the Obama administration’s nearly $1 trillion “economic stimulus” bill), job placement was sparse, and much of the training was delivered to already employed workers who did not need the training to perform their jobs, according to a Department of Energy auditing report.

Congress needs to put forth an energy bill, but one that does exactly the opposite of the American Energy Innovation Act.

Congress should undo the policies that have entangled the federal government in the business of energy and the decisions of families to make choices for themselves about what services and technologies best meet their needs.