Pompeo: On World Stage, Trump Has Achieved What Critics Said He Never Could 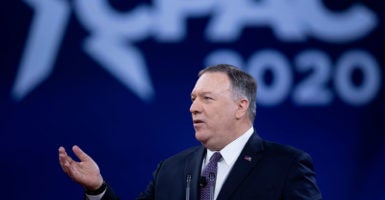 "You have to be clear about what you can do and you can’t do. No foreign policy built on fantasy ever works," Secretary of State Mike Pompeo says Friday at the Conservative Political Action Conference outside Washington. (Photo: Brendan Smialowski/AFP/Getty Images)

Secretary of State Mike Pompeo touted the Trump administration’s strong defense of religious liberty around the world Friday, while saying the president defies critics with achievements over “foreign policy built on fantasy.”

“Some people look at the killing of Christians in the Middle East and the persecution of Muslims in China and say that’s not our problem,” Pompeo said, adding:

What I say and what President Trump says is ‘Oh, yes it is, because God has blessed this country as a standard bearer of religious freedom.’ It’s important everywhere. When we spread freedoms, we are more prosperous, more secure, more stable. If we don’t defend religious freedom, no one else will. That’s why President Trump has made this essential to what it is we are trying to achieve.

Pompeo said the president has pursued a foreign policy that isn’t about ribbon cuttings and signing ceremonies:

You have to be clear about what you can do and you can’t do. No foreign policy built on fantasy ever works. The previous administration signed dangerous agreements that made Americans less safe, like the Iran nuclear deal, the Paris climate accord, and bad trade deals. …

If there is no compliance or the agreements are flawed, you need to get out. They are just ink and paper. So we did. President Trump is a smart businessman and changed course.

Pompeo said critics have said for years that the Trump administration could never achieve exactly what it has done on the international stage, from crushing the Islamic State terrorist army to negotiating a better trade agreement with Canada and Mexico.

They said you could never defeat ISIS. Now the caliphate is gone. They said we would never free Pastor [Andrew] Brunson imprisoned in Turkey. They said Mexico and Canada will never renegotiate their [trade] deal. They said the North Koreans would never engage in conversations about their nuclear weapons. They said they wouldn’t release their hostages and that we wouldn’t get the remains [of U.S.] soldiers.

We’ve done that. They said [exiting] the Iran nuclear deal would lead to runaway proliferation, but it has restored deterrence. They said taking out Qassim Suleimani would start World War III. It has actually made our world far safer. They said moving our embassy to Jerusalem would sit the Middle East alight. That didn’t happen, and our plan represents the best plan for peace in decades.