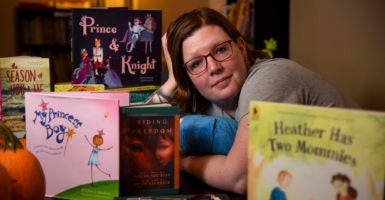 It started as just one rogue Wisconsin school, showing its LGBT pride. Now, five years later, it’s a national movement in public schools—and most parents have no idea it’s happening.

Do you want your child to be psychologically manipulated at school Thursday? Most moms and dads would say no.

But on Thursday, the Human Rights Campaign and its pals at the powerful National Education Association are teaming up to promote “Jazz and Friends National Day of School & Community Readings.”

“We want the listeners to know,” Family Research Council’s Meg Kilgannon told me on “Washington Watch,” “This could be happening in your school. Your children could be hearing a book [that is] very disturbing to young children.”

The book “I Am Jazz” is a favorite of transgender activists. It’s based on the real-life story of Jazz, a boy who was convinced that he was born in the wrong body.

“As a child he was injected with hormones to block his normal sexual development, and recently, he had radical surgery to complete his ‘transition’ to another sex,” Kilgannon says. “Which, of course, is impossible.”

Now, LGBT groups are pushing schools to make reading the book an annual event. The day will be used, FRC’s Cathy Ruse says, to promote gender deviance and LGBT politics to vulnerable children.”

“Not all schools are doing it. Yet. But some are,” she says.

In one school in Arlington, Virginia, administrators enlisted “mystery readers” to come read to children.

“The school has not revealed to parents who they are and what they will read,” Ruse warns.

And based on what we know about the “Drag Queen Story Hour” movement, that could mean anyone. To counterpunch, the Arlington Parents Coalition has urged parents to keep their kids home.

“We want all children to be treated with respect and dignity as children of God,” Kilgannon says, adding:

That’s a basic tenet of the Christian faith, of many faiths, that everyone should be, should have dignity. [But] that doesn’t mean that we need to reinforce these controversial ideas… that are untrue, biologically, and impossible. A boy cannot become a girl. A girl cannot become a boy.

But unfortunately, she warns, this kind of activity isn’t necessarily going to make it on the school calendar.

“It’s just something that’s going to happen—and then, once it’s over, it’s too late.”

Everyone should call their child’s school principal and ask, “Are you planning to have this reading in your school?”

If the principal says yes, it’s a great opportunity to turn in the universal opt-out letter available on Family Research Council’s website.

“It’s up to you what kind of a statement you want to make,” Kilgannon says.

But if your school is participating, make sure it knows where you stand.