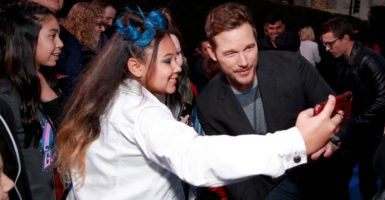 Spotlighting a lesbian character appears to be a clear effort to normalize the LGBT agenda, though it’s likely to go over the heads of many young children. Pictured: "Onward" voice star Chris Pratt obliges a young fan with a selfie at the Feb. 18 premiere of the Disney-Pixar animated feature in Hollywood. (Photo: Rich Fury/Getty Images)

It looks like Disney-Pixar, the folks behind an array of wonderful animated films such as “Toy Story,” “Finding Nemo,” and my personal favorite, the marvelous but underrated “Ratatouille,” has decided to dive headfirst into the LGBT universe.

While unsurprising, spotlighting such a character appears to be a clear effort to normalize the LGBT agenda, even though it’s likely to go right over the heads of many young children.

In “Onward,” Officer Specter is a cyclops police officer who, according to Yahoo Entertainment, is “voiced by openly gay screenwriter and actress Lena Waithe.”

Though the character has only one scene, she apparently is important to “the emotional arc of the story.”

While at first glance conservatives might be tempted to chalk up Officer Specter to pressure felt by Disney-Pixar to write a LGBT main character, that doesn’t seem to be the case here.

“Onward” producer Kori Rae told Yahoo Entertainment that the creation of a lesbian character “just kind of happened.” Rae said Officer Specter “opens up the world a little bit, and that’s what we wanted.”

Director Dan Scanlon simply said the film, which opens March 6, is a “modern fantasy world and we want to represent the modern world.”

Scanlon is certainly correct that the LGBT community is growing, but I’m not sure it’s as mainstream as Disney-Pixar thinks. And even if young adults are exploring their sexual identities, that wouldn’t mean it’s something that needs to be advertised to small children, toward whom this film most assuredly is marketed.

Statistics vary on the demographics of lesbian, gay, bisexual, and transgender Americans, especially among youth. Gallup estimated in 2018 that 4.5% of Americans are LGBT, for example, while a study published in Pediatrics found that as many as 30% of kids in foster care in California identified as LGBTQ.

One thing is for sure: Statistics of young people who self-identify as LGBT have increased.

The LGBT lobby likes to present such information as evidence that more kids are identifying this way because it’s more acceptable and more resources are available. I think this actually seems puzzling, and am surprised it’s viewed as a net gain and evidence of America’s growing “acceptance chops.”

Younger Americans may be self-identifying as LGBT because it’s almost popular now. Physician and researcher Lisa Littman was excoriated by LGBT groups for positing that evidence shows kids often identify as transgender, or struggle with their gender identity, as a result of being around peer groups that normalize it, not because they actually do.

Littman dubbed it “rapid-onset gender dysphoria” and it appears to function like any other aspect of peer pressure.

Most children ages 2 to 8 know or care very little about sex or gender differences, nor should they. Children ages 9 and up would know and care perhaps a bit more, but as a mother of four kids under 13, I can tell you this topic makes up a small portion of our daily lives. (Hygiene, on the other hand, remains an important, pressing, daily topic.)

I tend to think young children actually may fail to understand the significance of the Officer Specter character, such is their natural naiveté. Apparently Disney-Pixar doesn’t care what children can or should be aware of at this age. Its concern seems to be highlighting this lifestyle whether it’s helpful, informative, or entertaining.

The animated lesbian character in “Onward” may act as a kind of big-screen peer pressure that encourages kids to explore gender, sex, and attraction at an age when they aren’t capable of understanding the biological basics, let alone exploring them at a relationship level.

It’s one thing to support young adults in understanding their sexuality, but 8 years old seems a little young for that, doesn’t it, Disney?

Many films attempt to indoctrinate their audiences, for good or bad. This is normal and in fact an important part of many people’s experience making or viewing art.

But it’s dismaying to see Disney-Pixar take such big steps in crafting a lesbian character in a film for children—children who likely either will completely miss the point altogether or begin exploring topics too mature for them to understand.