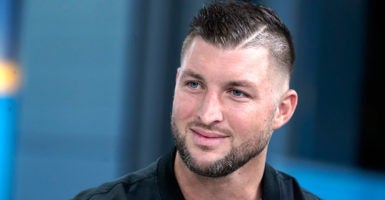 “One day, when you look back, and people are talking about you, and they say, 'Oh, my gosh, what are you going to be known for?’ Are you going to say ‘Super Bowl,’ or ‘We saved a lot of babies’?" asked Tim Tebow, pictured at Fox News Channel studios on Oct. 9, 2019, in New York City. (Photo: John Lamparski/Getty Images)

Tebow is known for both his athletic achievements—winning the 2007 Heisman Trophy and leading the University of Florida Gators to two national championships in 2007 and 2009—and for being a Christian and crusading pro-lifer.

“It really does mean a lot more than winning the Super Bowl,” he said at a recent football-themed banquet for Kansans for Life, according to National Right to Life News. “One day, when you look back, and people are talking about you, and they say, ‘Oh, my gosh, what are you going to be known for?’ Are you going to say ‘Super Bowl,’ or ‘We saved a lot of babies’?”

The theme of the annual banquet was “LIV-ing in Victory,” a reference to Super Bowl LIV, won Feb. 2 by the Kansas City Chiefs. About 1,200 people attended the event, including a group affiliated with the Super Bowl champion Chiefs. Chiefs’ owner Lamar Hunt Jr. served as the master of ceremonies.

Tebow, 32, now plays baseball in the New York Mets minor league farm system. Despite his success in sports, he told Martha MacCallum in a February 2019 interview on Fox News Channel’s “The Untold Story” that his work outside of athletics is more important to him.

During his Feb. 11 speech at the Kansans for Life Valentine’s banquet, Tebow turned toward the group associated with the Chiefs and acknowledged their achievement.

“What an accomplishment,” he said. “But you know the best part of that accomplishment is that it gets you an even bigger platform.”

Tebow, who married former Miss Universe Demi-Leigh Nel-Peters on Jan. 20,  has used his platform as a former college football champ and ex-NFL player to share his story and pro-life message.

In his speech, Tebow recounted his own experience, describing the pressure that was put on his mother to abort him. Doctors in the Philippines, where his parents were serving as missionaries, urged his mother, then 32, to have an abortion amid medical complications.

He was carried to term, however, and his mother survived and now calls Tebow her “miracle child.” The American-trained doctor in Manila told Tebow’s mother that in his 37 years of being a physician that it was the biggest miracle he’d ever seen.

“I’m so grateful that my mom trusted God with my life and her life,” Tebow said in his speech.

In the interview with MacCallum, Tebow said his parents’ kindness is what has inspired him to lead a life of service.

Tebow concluded his remarks by affirming—and at the same time, challenging—those attending the banquet.