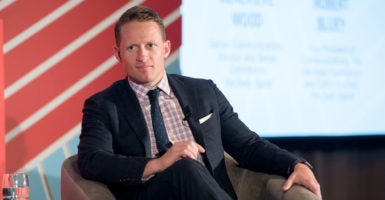 “Tim Chapman has been an indispensable leader in the conservative movement for many years, including over a decade of service for The Heritage Foundation and Heritage Action for America,” Heritage Foundation President Kay C. James said in a statement. “While I’m sad to see Tim leave Heritage Action, I know that we will continue to stand shoulder to shoulder to grow the conservative movement and build an America that we are proud to pass down to future generations.”

Chapman has served as executive director of Heritage Action since 2018, when he succeeded Mike Needham, who left Action to become chief of staff for Sen. Marco Rubio, R-Fla. Previously, Chapman served as chief operating officer at Heritage Action, a position he held since the organization was founded in 2010.

“It has been a true honor to work with some of the brightest minds at The Heritage Foundation and help turn conservative ideas into reality on Capitol Hill,” Chapman said in a statement. “Working together with Heritage, we have accomplished significant policy goals and made important advancements for the American people. The Heritage Foundation and Heritage Action are a powerful combination and I am confident they will continue to shape public policy issues in the future.”

“For the first time ever, Action took it upon itself to launch a $2.5 million campaign to support 13 congressional candidates,” the 2018 Heritage Foundation annual report states, noting that the organization also tried a new technology: “‘peer-to-peer texting,’ which allowed Sentinels [Heritage Action activists] to remind huge numbers of voters to show up at the polls and vote. In the final stretch of the campaign, they sent 220,000 texts to swing voters in the targeted districts.” Ultimately, seven of the 13 candidates won their races.

As he steps into the new role at Stand for America, Chapman will join with Haley to focus on policy issues, including the U.S. economy, culture, and security.

“We are grateful for Tim Chapman’s leadership of Heritage Action and excited for him as he takes on this new role at Stand for America,” said Nersi Nazari, chairman of Heritage Action’s board of directors. “Our board will continue to work with the team at Heritage Action to ensure our grassroots advocacy efforts continue in this critical year.”

Before his 10-year stint at Heritage Action, Chapman served in different roles at The Heritage Foundation, including as chief of staff to Heritage founder and former President Ed Feulner. He also spent time working in the Senate as a deputy press secretary and communications adviser.