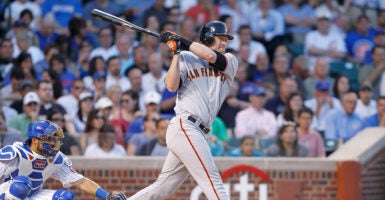 Aubrey Huff #17 of the San Francisco Giants bats against the Chicago Cubs on June 28, 2011, at Wrigley Field in Chicago. The Giants won 6-3. (Photo: Joe Robbins/Getty Images)

The San Francisco Giants will be celebrating the 10-year anniversary of their winning the 2010 World Series with a reunion this summer, but one of the key players from the championship team won’t be there.

Former Giants first baseman Aubrey Huff was disinvited because of some tweets that the team’s management decided were offensive and, he said, politically incorrect.

“Three weeks ago, I had a call with Larry Baer, CEO of the San Francisco Giants. He took me by surprise when he told me I was unanimously voted against attending the Giants’ World Series Championship reunion,” Huff tweeted Tuesday. “When I asked why I wasn’t invited, he told [me] that the board didn’t approve of my Twitter posts, and my political support of Donald Trump.”

Huff, now 43, led the Giants in home runs with 26 and in runs batted with 86 during their 2010 championship season. He played two more years in San Francisco before retiring after the 2012 season, in which the Giants again won the World Series.

“We reached out to Aubrey Huff to let him know that he will not be included in the upcoming 2010 World Series Championship reunion,” the Giants said in a statement emailed to The Athletic, the sports website that first reported the snub on Monday. The reunion is scheduled for Aug. 16.

“Aubrey has made multiple comments on social media that are unacceptable and run counter to the values of our organization. While we appreciate the many contributions that Aubrey made to the 2010 championship season, we stand by our decision,” the team statement said.

In a January tweet about Iranian women that he said was a joke but that has since been deleted, Huff wrote, in part, “Let’s get a flight over and kidnap about 10 each. We can bring them back here as they fan us and feed us grapes … .”  In a stick-figure drawing that followed, according to The Athletic, one of three women says, “Oh, thank you Mr. Huff [for] saving us from the hell in Iran! We will be forever grateful!”

Huff said that his support of President Donald Trump is what really angered the Giants’ board. He also defended his use of “locker-room humor,” writing that he uses it satirically on Twitter. He noted that it helped the team relax before the 2010 World Series games. The same humor, he wrote, is now the cause for him being excluded.

“They loved it then, and it hasn’t changed. That’s not the issue. It’s politics,” Huff said, contending that a politically correct society was threatening the First Amendment and free speech rights.

“To the Giants’ board members who seem to think every Giants fan is a liberal, they aren’t,” he added. “I have had thousands of [die-hard] Giants fans reach out to me on my social media platforms to support me.”

Andrew Baggarly, the Giants beat writer for The Athletic, disputed Huff’s assertion that the team’s board’s snub was motivated by his politics. Baggarly tweeted Monday that “they are not banning Aubrey Huff because they dislike or disagree with his political views. They believe he has crossed the line when it comes to misogyny, vulgarity, and common decency.”

Huff told The Athletic he was “shocked” and “disappointed” by his exclusion from the August celebration.

“If it wasn’t for me, they wouldn’t be having a reunion,” he said. “But if they want to stick with their politically correct, progressive bull—-, that’s fine.”