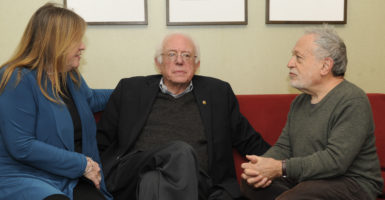 Former Labor Secretary Robert Reich, right, waits backstage with Sen. Bernie Sanders, I-Vt., and his wife, Jane O'Meara Sanders, before Sanders speaks Dec. 2, 2016, at the University of California, Berkeley, about his book "Our Revolution." Reich is a professor of public policy at the school. (Photo: Arun Nevader/Getty Images)

A recent Pew Research Center survey finds that only half of American adults think colleges and universities are having a positive effect on our nation.

The leftward political bias, held by faculty members affiliated with the Democratic Party, at most institutions of higher education explains a lot of that disappointment.

Professors Mitchell Langbert and Sean Stevens document this bias in their study “Partisan Registration and Contributions of Faculty in Flagship Colleges.”

Langbert and Stevens conducted the new study of the political affiliation of 12,372 professors in the two leading private colleges and two leading public colleges in 31 states.

For party registration, they found a Democratic to Republican (D:R) ratio of 8.5:1, which varied by rank of institution and region.

For donations to political candidates (using the Federal Election Commission database), they found a D:R ratio of 95:1, with only 22 Republican donors, compared with 2,081 Democratic donors.

Several consistent findings have emerged from Langbert and Stevens’ study.

The ratio of faculty who identify as or are registered as Democratic versus Republican almost always favors the Democratic Party.

Democratic professors outnumber their Republican counterparts most in the humanities and social sciences, compared with the natural sciences and engineering. The ratio is 42:1 in anthropology, 27:1 in sociology, and 27:1 in English.

In the social sciences, Democratic registered faculty outnumber their Republican counterparts the least in economics, 3:1. The partisan political slant is most extreme at the most highly rated institutions.

The leftist bias at our colleges and universities has many harmful effects. Let’s look at a few.

At American University, a history professor recently wrote a book in which he advocates repealing the Second Amendment. A Rutgers University professor said, “Watching the Iowa caucus is a sickening display of the overrepresentation of whiteness.”

Robert Reich, a professor at University of California, Berkeley, and former secretary of labor, chimed in to say:

Think about this: Iowa is 90.7% white. Iowa is now the only state with a lifetime voting ban for people with a felony conviction. Black people make up 4% of Iowa’s population but 26% of the prison population. How is this representative of our electorate?

A Williams College professor said he would advocate that social justice be included in math textbooks. Students at Wayne State University no longer have to take a single math course to graduate; however, they soon may be required to take a diversity course.

Then there’s a question about loyalty to our nation.

Charles Lieber, former chairman of the Department of Chemistry and Chemical Biology at Harvard, was arrested earlier this year on accusations that he made a materially false, fictitious, and fraudulent statement about work he did for a program run by the Chinese government that seeks to lure American talent to China.

Lieber was paid $50,000 a month and up to $158,000 in living expenses for his work, which involved cultivating young teachers and students, according to court documents.

It’s not just Harvard professors. Newly found court records reveal that Emory University neuroscientist Li Xiao-Jiang was fired in late 2019 after being charged with lying about his own ties to China. Li was part of the same Chinese program as Lieber.

A jury found a University of California, Los Angeles, professor guilty of exporting stolen U.S. military technology to China. Newsweek reported that he was convicted June 26 on 18 federal charges.

Meanwhile, NBC News reported that federal prosecutors say that University of Texas professor Bo Mao attempted to steal U.S. technology by using his position as a professor to obtain access to protected circuitry and then hand it over to the Chinese telecommunications giant Huawei.

The true tragedy is that so many Americans are blind to the fact that today’s colleges and universities pose a threat on several fronts to the well-being of our nation.