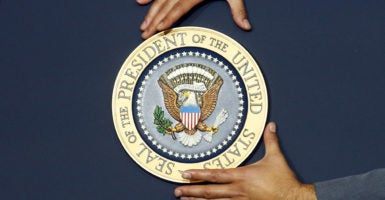 The Framers of the Constitution wanted to ensure that an American president would have the power to defend the country when the safety, security, and independence of its people are threatened. (Photo: Luke Sharrett/Bloomberg/Getty Images)

On Presidents Day, we celebrate the life and accomplishments of our first president, George Washington, the father of our country, and Abraham Lincoln, our 16th president and one of our most renowned statesmen.

On that day, Feb. 17 this year, we should remember that the Framers of the Constitution wanted to ensure that an American president—such as Washington and Lincoln—would have the power to defend the country when the safety, security, and independence of its people are threatened.

And that power is exactly what they gave the president in the Constitution when they made him the commander in chief of our military forces.

This is particularly important given recent legislation passed by the House of Representatives, a so-called “war powers resolution.” It condemned President Donald Trump for ordering the lawful targeting of an Iranian general, terrorist mastermind Qassim Suleimani, and ordered Trump to stop using all military force against Iran without prior congressional approval.

Iran has been a longtime state sponsor of terrorism, according to our own State Department, and Suleimani made himself a target. He was a mass murderer responsible for thousands of deaths, including hundreds of Americans.

On a recent trip through Pennsylvania, I was reminded of what Americans have suffered at the hands of terrorists and the importance of having a commander in chief with broad constitutional authority to react immediately to threats against the nation.

On a cold, icy day, my wife and I stopped at the Flight 93 National Memorial, which honors the 33 passengers and seven crew members of United Flight 93 who died when their Boeing 757 airliner crashed into a field just outside Shanksville, Pennsylvania, on Sept. 11, 2001.

We all know what happened on 9/11. Al-Qaeda terrorists hijacked four commercial airliners. They flew two into the twin towers of the World Trade Center, and flew the third into the Pentagon, murdering almost 3,000 people.

The fourth flight was United Flight 93. It took off from Newark, New Jersey, headed for San Francisco with four hijackers on board masquerading as passengers. Forty-six minutes into the flight, they attacked the captain and first officer, took over the controls of the airplane, and changed direction to head for Washington, D.C.

Half an hour later, the plane crashed upside down at 563 miles per hour into the field where the memorial is today.

We know what happened in that critical half-hour not only from the cockpit voice recorder recovered by authorities at the horrendous crash site, but from the 37 telephone calls to, and voicemail messages left with, the friends and families of the passengers on the flight.

Through those phone calls, the passengers learned of the attacks on the World Trade Center and Pentagon and quickly realized why the hijackers were headed for Washington.

The passengers made a collective decision, took a vote, and decided to attempt to retake the plane. Among the passengers was Todd Beamer, an Oracle account manager who was the father of two sons, David and Andrew, and whose wife, Lisa, was pregnant with their third child.

A born leader, Beamer decided to take matters into his own hands and fight back. Before leading other passengers in a final fight against the terrorists, he called flight dispatch and spoke with Lisa Jefferson. He asked her to say the Lord’s Prayer with him.

After praying with her, Beamer uttered his famous words, “Let’s roll,” to his fellow passengers. The cockpit recorder captured the shouts, crashes, and sounds of the melee that occurred when the passengers attacked, including one who yelled, “Let’s get them!”

The 9/11 Commission concluded that the hijackers crashed the plane when they realized that the passengers were only seconds away from overcoming them and taking back control of the plane.

The Flight 93 National Memorial, just like the National September 11 Memorial & Museum in New York and the National 9/11 Pentagon Memorial, is deeply affecting. Set in a bucolic, quiet Pennsylvania field, the memorial is a solemn reminder of the ravages of terrorism and the triumph of ordinary heroes over evil incarnate.

It is impossible to view, listen to, and read the personal stories of the individual passengers on that flight without being greatly moved and greatly angered. The stories explain what has happened on the plane and what the passengers plan to do about it even as they say farewell to their loved ones.

These average, ordinary Americans took on four jihadist hijackers at the cost of their own lives. They prevented those terrorists from what would have been a devastating attack on a notable location in Washington, most likely the U.S. Capitol or the White House. The Flight 93 crash site is only 18 minutes flying time from Washington.

There is no need to rehash what happened after 9/11, including the immediate steps that President George W. Bush took to safeguard the country and to go after the terrorists who had sponsored, financed, and planned the attack on America. But Bush’s actions illustrate how important it was then, and is today, that our Constitution provides for a strong commander in chief.

As the Justice Department said in a 2001 legal opinion, no law and no congressional resolution “can place any limits on the President’s determinations as to any terrorist threat, the amount of military force to be used in response or the method, timing, and nature of the response. These decisions, under our Constitution, are for the president alone to make.”

That is a good thing.

So while we are celebrating Washington, who led an eight-year fight for our liberty, and Lincoln, who fought to stop the breakup of the Union, we also should be thankful for other presidents who used the strong power of the executive to protect the nation.

That includes President Franklin Roosevelt, who led us in the largest war in our history against two brutal tyrannies, as well as Bush, who acted decisively after the worst attack on American soil since Pearl Harbor.

Trump also should be applauded for taking out a terrorist thug who had American blood on his hands, and who would have continued to kill Americans.

Americans just like those who died on United Flight 93 when it crashed in what the National Park Service appropriately calls “a field of honor forever” in Shanksville, Pennsylvania.