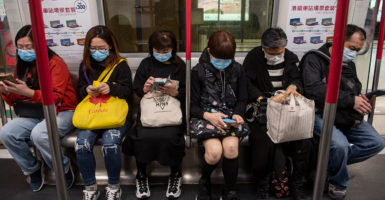 In nighttime photos from space, North Korea looks like a black hole compared to the well-lit South. It’s an apt metaphor for what we know about what’s going inside the DPRK now: Nada.

That absence of information poses a real problem when a global health threat is on the loose. And the coronavirus is most definitely a global threat.

Though we can only guess what’s going on in Kim Jong Un’s dark kingdom, it’s hard to imagine a rosy scenario.

What we do know is that the government in Pyongyang has announced that its border with China is closed. Is the virus already across? Will it find its way in any way? Even if the correct answer to both questions is “no,” North Korea still has a problem. Lack of trade and travel, even a temporary ban, will further cripple the economy of what is already the poorest country on earth. The bottom line: Starving North Koreans will starve more.

Odds are that North Korea can tough it out in the short term. Flu season should abate in April. The contagion will then be less of a concern, at least until the autumn. The North Korean people have been through worse.

If the coronavirus does spread to the DPRK, that’s a different set of problems. On the one hand, the best way to deal with a global pandemic is transparency; sharing information can help all nations to develop the most efficacious response. China has been very bad with transparency. North Korea would be worse.

On the bright side—at least for those of us not trapped in Kim’s domain—North Korea has nothing remotely close to the social mobility available in China.

Further, if the government decides to crack down further, implementing quarantine and even more travel restrictions, you can bet they’ll be enforced. Ruthlessly. Brutal dictatorships are good at that sort of thing.

But, as noted above, North Koreans are tough. They have suffered through decades of deprivation and pain—mostly at the hands of the regime in Pyongyang. So, they likely survive this.

What will happen to the sick? The state of North Korea’s health care is thought to be pretty appalling. The sick will die.

Should there be a widespread outbreak in North Korea, and if the regime admits it, civilized nations will want to pony-up international aid. That aid, quite literally, would make the difference between life and death for countless Koreans.

But until we know what’s going on in North Korea, there’s really nothing we can do for them.

In the meanwhile, we can best spend our effort cooperating with the rest of the world in limiting the spread of the virus. That means implementing responsible travel, testing, treatment, and public health policies, as well as delivering appropriate humanitarian assistance.