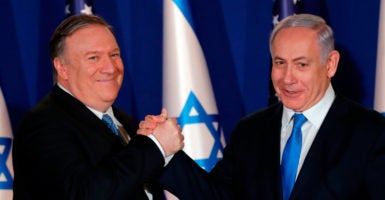 "Attempts to isolate Israel run counter to all of our efforts to build conditions conducive to Israeli-Palestinian negotiations that lead to a comprehensive and enduring peace," says Secretary of State Mike Pompeo, pictured with Israeli Prime Minister Benjamin Netanyahu in Jerusalem March 21, 2019. (Photo: Jim Young/AFP/Getty Images)

The U.N. Office of the High Commissioner for Human Rights released a report including a database of businesses active in Israeli settlements in the Palestinian territories in compliance with U.N. Human Rights Council resolution A/HRC/43/71.

The purpose of the report is to provide a patina of U.N. approval to the Boycott, Divestment, and Sanctions movement, which seeks to delegitimize Israel and aims at applying political and economic pressure on companies doing business with Israeli settlements.

The database—also referred to as a BDS blacklist—was delayed several times due to opposition by the U.S. and other countries who see the report as discriminatory.

Specifically, the Human Rights Council resolution focused solely on the situation in the Palestinian territories and did not require a database for businesses active in territories like Crimea, the Georgian territories of Abkhazia and South Ossetia, Northern Cyprus, Western Sahara, and other situations.

I am outraged that High Commissioner for Human Rights Michelle Bachelet published a database of companies operating in Israeli-controlled territories. The United States has long opposed the creation or release of this database, which was mandated by the discredited UN Human Rights Council in 2016. Its publication only confirms the unrelenting anti-Israel bias so prevalent at the United Nations. The United States has not provided, and will never provide, any information to the Office of the High Commissioner to support compilation of these lists and expresses support for U.S. companies referenced.  We call upon all U.N. member states to join us in rejecting this effort, which facilitates the discriminatory boycott, divestment, and sanction (BDS) campaign and delegitimizes Israel. Attempts to isolate Israel run counter to all of our efforts to build conditions conducive to Israeli-Palestinian negotiations that lead to a comprehensive and enduring peace.

The Trump administration left the U.N. Human Rights Council in 2018 because of its deep anti-Israel bias. For instance, since it was created in 2006, nearly half of the condemnatory resolutions passed by the council focused on Israel.

In contrast to this obsessive focus on Israel, the council has never passed condemnatory resolutions on China, Cuba, Russia, Saudi Arabia, or Zimbabwe despite their terrible human rights records. The U.S. should not return to or support the council until its institutionalized anti-Israel bias ends.

Likewise, the decision of Bachelet, the high commissioner, to release the report directly targeting a key U.S. ally and supporting sanctions for six U.S. corporations should lead the U.S. to end its voluntary contributions to the Office of the High Commissioner for Human Rights, consider withholding its part of the U.N. regular budget funding the office, and suspend its engagement with the office and the U.N. human rights experts supported by the office.

In addition, the U.S. should take steps to help offset the economic pressure that could result from the report. One option would be to direct the new U.S. International Development Finance Corp. to offer financing, insurance, and other support for businesses engaged in the Israeli settlements.

When Congress replaced the Overseas Private Investment Corp. with the Development Finance Corp., a key motivation was to require the new institution to support U.S. foreign policy and economic objectives.

Blunting the impact of the U.N. blacklist would help demonstrate that the new institution takes its goal of “advancing U.S. foreign policy” seriously.