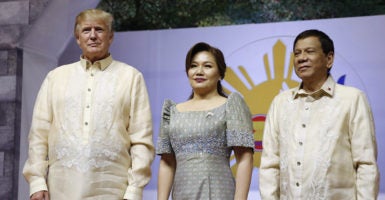 This 2017 photo shows President Donald Trump and Philippine President Rodrigo Duterte and his wife Cielito Avancena at a dinner marking the 50th birthday of ASEAN, on the eve of the 12th East Asia Summit. (Photo: Dmitry AstakhovTASS/ Getty Images)

On Tuesday, Rodrigo Duterte, president of the Philippines, formally notified Washington of his intention to terminate the Visiting Forces Agreement his government has with the United States. It is a major development.

But before we react, we should take a deep breath. And in fact, that appears to be exactly what the U.S. government is doing.

The Visiting Forces Agreement goes back to 1999, but in fact, has much deeper roots.

Until 1992, the U.S. maintained its own military bases in the Philippines under a 1947 agreement. The Visiting Forces Agreement, the successor to that arrangement, does not permit foreign bases on Philippines soil, but it does lay out the basis for U.S. deployments agreed to by authorities in Manila. Essentially, the agreement reaffirmed and operationalized the 1952 U.S.-Philippines Mutual Defense Treaty for a new, post-Cold War era.

So as we measure our reaction to Duterte’s latest move, it’s worth reflecting on the period between 1992, when U.S. bases in the Philippines were officially closed, and 1999, when the Visiting Forces Agreement was ratified.

The point is that U.S.-Philippine relations are deeper than one leader. They will correct and get through this. In the meantime, Washington must keep its nerve.

Filipino leaders (with the exception of Duterte and some others never much enamored of America) know the value of the agreement and will continue to fight for a good outcome. It has already become a hot issue in the usual pliant Philippine Senate.

Just last week, the Philippines’ foreign secretary, Teodoro Locsin Jr.—himself a somewhat mercurial character—testified to the benefits of the agreement before the Senate of the Philippines.

Among other things, he cited potential disruption of capability-enhancing joint training exercises, critical counterterrorism assistance such as the U.S. provided during the fight in Marawi in 2017, and the deterrent effect on Chinese adventurism in the South China Sea.

Beyond Locsin, abrogation of the agreement is clearly unpopular among the security establishment in Manila. The defense secretary initially dismissed the move as “fake news” and refused to salute until he saw an official notification.

The U.S. and Philippines are building out new logistics sites under the now 6-year-old Enhanced Defense Cooperation Agreement. This has value and once held great promise, but it won’t continue without the Volunteer Forces Agreement—and as things stand, it won’t be a major loss, given its slow halting progress and unimpressive results.

The U.S. does have a major interest in countering insurgencies in the Philippines because stability there and elsewhere in Southeast Asia is of critical importance.

That is why the U.S. offered indispensable support during the Battle of Marawi. More than 100 Filipinos servicemen made the ultimate sacrifice in that conflict. Were it not for the assistance of the U.S. (and Australia), their sacrifices would have been in vain.

So yes, the U.S. has an interest in fighting terrorists in the Philippines. And if push came to shove, we probably would find ad hoc ways to help, even without the Visiting Forces Agreement. But Manila’s interest in its war against its own insurgents is even greater than America’s. It should want the U.S. involved as efficiently and as effectively as possible—in keeping with the Philippines’ Constitution.

As far as the South China Sea is concerned, the U.S. and the Philippines have intersecting interests over Chinese attempts to seize the space for themselves, but our interests are not identical. The U.S. seeks freedom for its Navy to operate in international waters. Security for its allies is important, but secondary.

The U.S. certainly can’t have more interest in its allies’ security than they have in their own. If Manila thinks it can secure itself against Chinese designs in the absence of a U.S. presence, go for it. The U.S. Pacific Fleet can manage without it. But it would make much more sense to work together.

Ostensibly, Duterte is terminating the Visiting Forces Agreement because the U.S. revoked the visa of his friend and collaborator, former National Police Chief and Sen. Ronald Dela Rosa, for his involvement in the president’s murderous drug war.

It’s possible. Duterte is an impulsive kind of guy. But more likely, the visa denial just presented Duterte an opportunity. He came into office in 2016 intending to overturn U.S.-Philippine relations, declaring publicly his intention to realign the Philippines in China’s “ideological flow.”

Duterte’s domestic political support is strong, and his confrontations with the U.S. do not seem to do him much damage. Many Filipinos, maybe most, are drawn to the theatre of it all, his outbursts, his cursing, the iconoclast image.

Besides, Filipino views of the U.S. are complicated. The people of any former colony have mixed feelings about their former rulers. The story of U.S.- Philippines relations is not all as heroic as MacArthur’s famous return to Leyte.

That said, Duterte’s political support does not mean there is corresponding support for his strident views on the United States. Poll after poll show Filipinos to be among the most pro-American people in the world.

Duterte’s presidency will pass. And when it does, the U.S. and the Philippines will resume a less dramatic relationship, one built on our common interests, history, current strong personal ties, and extraordinary competence of dedicated officials on both sides of the relationship.

Until then, the U.S. must continue to work with its friends in the Philippines to weather the storm.