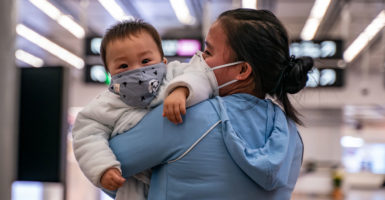 A woman carries a baby wearing a protective mask as they exit the arrival hall at Hong Kong High Speed Rail Station Jan. 29, 2020, in Hong Kong. Hong Kong government will deny entry for travelers who has been to Hubei province except for local residents in response to tighten the international travel and border crossing to stop the spread of the virus. (Photo: Anthony Kwan/Getty Images)

A 35-year-old Washington, D.C., man visited an urgent care clinic on Jan. 19, a few days after returning from Wuhan, China.

After undergoing testing, the Centers for Disease Control and Prevention determined that he had contracted the 2019-nCoV coronavirus—the first such case in the United States.

Since surfacing in Wuhan in December, the 2019-nCoV coronavirus has spread to nearly 30 countries, killing 565 and infecting more than 28,000 worldwide. As of this writing, 12 cases have been confirmed in the U.S. Note that these numbers are changing almost every hour.

As cases began to emerge within American borders, the Trump administration took quick and decisive action.

By creating a coronavirus task force, issuing stringent travel restrictions, and offering to aid the Chinese in combating the outbreak, the White House has made every effort to protect the American people and stop the virus from spreading.

First, on Jan. 29, the White House announced the formation of the task force, designed to facilitate interagency coordination while keeping President Donald Trump informed on the epidemic.

As The Heritage Foundation’s Peter Brookes has pointed out, it’s somewhat odd that the task force did not initially include officials from the Department of Defense. Not only does the Pentagon have immense logistical resources at its disposal, it also has been requested to provide housing for individuals under quarantine. Perhaps by now, the Defense Department is represented on the task force.

Overall, however, the creation of the task force should be considered a success. Continued collaboration between government agencies will be essential for containing the spread of the virus.

Then, on Jan. 31, Trump signed a proclamation restricting travel from China to the United States.

The document first outlined two types of quarantines for U.S. citizens returning from China, depending on which regions they had traveled to.

Americans who traveled to Hubei province—the epicenter of the 2019-nCoV outbreak—within the past two weeks must undergo up to 14 days of mandatory quarantine, conducted at various locations and military bases.

Meanwhile, Americans returning from other regions of China will face up to 14 days of monitored self-quarantine in their own homes.

Second, Americans who enter the country after traveling to China are being routed through certain airports, where Centers for Disease Control and Prevention experts can conduct advanced health screenings.

Originally, only seven airports were designated as entry points. Since Trump’s proclamation was issued, four more have been added.

Third, foreign nationals who visited China within the past two weeks will be barred from entering the United States.

While this provision contains a number of exceptions—family members of U.S. citizens and foreign nationals working on flight crews, for instance, are exempted—some commentators have criticized it as too harsh a response.

Overall, however, these restrictions actually demonstrate a willingness to protect the American people—by whatever means necessary.

Dr. Nancy Messonnier, director of the CDC’s National Center for Immunization and Respiratory Diseases, summed up the rationale behind such a drastic response.

“We would rather be remembered for overreacting than underreacting,” she said.

Finally, the executive branch has helped with the outbreak in China itself.

During his State of the Union address Tuesday night, Trump announced that the U.S. is “coordinating with the Chinese government and working closely together” to combat the spread.

The day before, on Monday, Health and Human Services announced that American experts will join a World Health Organization team tasked with curbing the outbreak in China. The U.S. has also delivered medical supplies and humanitarian goods to authorities in Wuhan.

On the whole, the Trump administration’s response to the coronavirus outbreak has been decisive and comprehensive, and—thus far, at least—seems to be quite effective.

The U.S. response has generated backlash from the World Health Organization and the Chinese government, which have framed the travel restrictions as too extreme. But protecting the American people must be any U.S. president’s first priority.

Ultimately, the administration deserves praise for formulating a robust response to the outbreak.