What Part of ‘Sell By’ Expiration Dates Do ERA Backers Not Understand? 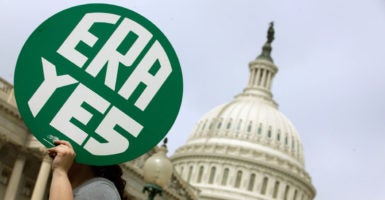 The Congressional Research Service concluded long ago that the ERA “died on June 30, 1982.” Pictured: A rally to mark the 40th anniversary of congressional passage of the Equal Rights Amendment outside the U.S. Capitol March 22, 2012. (Photo: Chip Somodevilla/Getty Images) 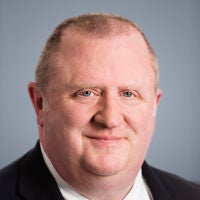 Some things in life are confusing or complicated, but an expiration date shouldn’t be one of them.

Milk may not be sold after its “sell by” expiration date. You can’t get the deal on that furniture after the sale ends. Even that special at Olive Garden is available “for a limited time only,” even though it’s called “never-ending stuffed pasta.”

Why then are some folks claiming that the Equal Rights Amendment still can be ratified nearly four decades after it expired?

When Congress, by a two-thirds vote of both houses, proposes a constitutional amendment, three-fourths of the states (38 today) must ratify it for it to become part of the Constitution.

The power to propose amendments includes the power to set a time limit for ratification. Congress has included such an expiration date in nearly one-third of the amendments it has proposed, and eight of those amendments (the 18th and the 20th through the 26th) are in the Constitution today.

Congress also included a seven-year ratification deadline when it proposed the ERA on March 22, 1972. All told, 35 states ratified the ERA, but five of those states reversed and rescinded their ratification by that deadline. No state ratified it during a controversial three-year deadline extension period. That’s why National Public Radio reported that “the ERA … expired in 1982.”

That would be a historical footnote, but three states now claim that they recently ratified the 1972 ERA: Nevada in 2017, Illinois in 2018, and Virginia last week on Jan. 27.

ERA activists claim that—as long as you ignore the states that withdrew their support—the required 38 states have ratified the ERA, and it’s now the 28th Amendment to the Constitution.

These states know what an expiration date is.

Virginia law, for example, declares: “Every driver’s license shall expire on the applicant’s birthday at the end of the period of years for which a driver’s license has been issued.” Typical of many, one randomly selected lawyer’s website states that “[i]f your license expires, it’s no longer valid.” Nevada and Illinois have similar laws.

According to the National Archives, the archivist of the United States is responsible for reviewing documents submitted by states claiming to have ratified a constitutional amendment. If the documents pass a “legal sufficiency” test, the archivist certifies that the amendment is part of the Constitution.

Needless to say, a resolution claiming to ratify a constitutional amendment that expired in 1982 cannot be legally sufficient.

On Jan. 6, the U.S. Justice Department’s Office of Legal Counsel issued an opinion that “Congress had the constitutional authority to impose a deadline on the ratification of the ERA and, because that deadline has expired, the ERA Resolution is no longer pending before the States.”

Two days later, following that advice, the National Archives and Records Administration issued a statement that it will “abide by the OLC opinion, unless otherwise directed by a final court order.”

Three lawsuits have been filed on the issue. First, the states of Alabama, Louisiana, and South Dakota filed suit on Dec. 16. Neither Alabama nor Louisiana ratified the ERA, and South Dakota rescinded its ratification. They want a judgment declaring that “the ERA cannot be ratified because the congressional deadline has expired and that all ratifications after the 1979 deadline … are null and void.”

They also want a permanent injunction prohibiting the archivist “from accepting or acknowledging any additional ratifications of the ERA.”

Second, two organizations and a Massachusetts resident filed suit on Jan. 7, the day after the Justice Department’s opinion. They want the court to say that the deadline in the 1972 ERA is invalid and that states may not rescind ratification.

Third, the commonwealth of Virginia and the states of Illinois and Nevada filed suit on Jan. 30. They want an order that the archivist must “publish and certify the Equal Rights Amendment as part of the U.S. Constitution.”

Count on lawyers to make the simple complicated.

Until recently, everyone understood the obvious. The Congressional Research Service concluded long ago that the ERA “died on June 30, 1982.”

A new analysis from The Heritage Foundation also explains that when a ratification deadline passes “without ratification by three-fourths of the states, the proposed amendment expires and is no longer pending,” adding:

The 1972 ERA, therefore, can no longer be ratified, because it no longer exists.