Why Capitalism Is a Blessing to Mankind 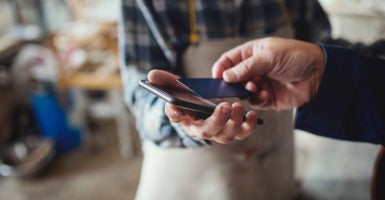 Ralph Benko is chairman of The Capitalist League and co-author of the book, "The Capitalist Manifesto: The End of Class Warfare, Toward Universal Affluence."

William Collier is the co-founder and president of The Capitalist League and co-author of the book, "The Capitalist Manifesto: The End of Class Warfare, Toward Universal Affluence."

To understand true capitalism you have to start with an understanding of capital. Capital is the secret sauce of capitalism. So, what is it?

The New Oxford American Dictionary defines capital as: wealth in the form of money or other assets owned by a person or organization or available or contributed for a particular purpose such as starting a company or investing.

In plain words, capital means tools and know-how. There’s nothing sinister about it.

Capital is simply skills and tools.

Stocks and bonds are the classical instruments of capitalism. These are “claim checks.” They are the instruments proving that someone with savings has put those savings into a business, thereby owning a portion or being its lender.

The business then uses that money to build factories, warehouses, office space, or to buy equipment or other necessities for being productive.

People with know-how—the “human capital”—invent, build, sell, and distribute goods and services. These enterprises contribute more to the general welfare than they cost. That’s “profit.”

Profit is not a dirty word. If a business doesn’t add more to the general welfare than its cost of doing business it doesn’t last long. Ecologists are not the only ones concerned with sustainability.

True capitalism rewards those who bring capital—skills and tools—to society. The more value they create for the rest of us the more profit they make. If profits get too high, competitors swoop in. Competition—not officious meddling—is what pushes prices down.

The first mortal enemy of capitalism is philosophical and obvious: Socialists, including those of its most virulent form, communists, are committed to capitalism’s destruction and are forthright in declaring that.

The second mortal enemy is practical and unexpected: Many successful capitalists disdain, sometimes with implacable hostility, the system by which they achieved wealth.

Hayek wrote, in an essay titled “Intellectuals and Socialism” published in the Spring 1949 issue of The University of Chicago Law Review:

The difficulty of finding genuine and disinterested support for a systematic policy for freedom is not new. In a passage of which the reception of a recent book of mine has often reminded me, Lord Acton long ago described how

“At all times sincere friends of freedom have been rare, and its triumphs have been due to minorities, that have prevailed by associating themselves with auxiliaries whose objects differed from their own; and this association, which is always dangerous, has been sometimes disastrous, by giving to opponents just grounds of opposition…”

More recently, one of the most distinguished living American economists has complained in a similar vein that the main task of those who believe in the basic principles of the capitalist system must frequently be to defend this system against the capitalists—indeed the great liberal economists, from Adam Smith to the present, have always known this.

It may be that as a free society as we have known it carries in itself the forces of its own destruction, that once freedom has been achieved it is taken for granted and ceases to be valued, and that the free growth of ideas which is the essence of a free society will bring about the destruction of the foundations on which it depends.

There can be little doubt that in countries like the United States the ideal of freedom today has less real appeal for the young than it has in countries where they have learned what its loss means.

Big business today is often in cahoots with big government. Together they preserve the facade while hollowing out the substance of true capitalism. Thus they enhance their privileges at our expense, traducing the soul of capitalism.

Thus do some capitalists seek to appropriate and devalue the capitalist brand. Fat cats are discrediting a fine philosophy.

They betray its essence to justify what are essentially feudalistic practices, economic success based on status rather than merit. By misappropriating and misrepresenting the capitalist brand they persuade a naïve public to kill the goose that lays the golden eggs.

True capitalism is an imperfect but, in practice, unrivaled mechanism to generate equitable prosperity. To reiterate the words of its original philosopher and prophet, Adam Smith, true capitalism will produce “universal opulence which extends itself to the lowest ranks of the people.”

This expert was taken with permission from Ralph Benko and William R. Collier Jr.’s book, “The Capitalist Manifesto: The End of Class Warfare, Toward Universal Affluence.”