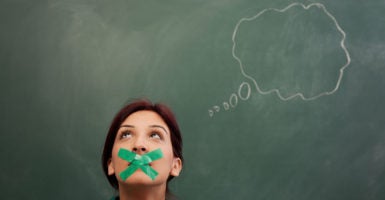 The nonprofit Foundation for Individual Rights in Education this week issued its ninth annual report on what it says are the worst examples of free-speech abridgement on America's college and university campuses. (Photo: Selimaksan/Getty Images)

The Foundation for Individual Rights in Education, a group dedicated to standing up for free-speech rights on U.S. college and university campuses, this week released its annual report chastising the Top 10 schools where it says those rights are most infringed.

Among the schools taken to task in this year’s report, “The 10 Worst Colleges for Free Speech: 2020,” are Harvard University, a repeat offender, and six other East Coast schools.

The ninth annual report explains why each college or university made the list, ranging from Babson College, which fired a professor over an “innocuous” joke in a private social media post, to the University of Scranton, where the student government refused approval for the startup of a student chapter of a national organization, Turning Point USA, because the group supports conservative causes.

In addition to the “10 worst,” FIRE awarded Rensselaer Polytechnic Institute (Troy, N.Y.)  the dubious distinction of the Lifetime Censorship Award for maintaining what it called “a years-long rap sheet of flagrant censorship.” According to the foundation, the Lifetime Censorship Award is “reserved for a college or university that threatens the free-speech rights of its students and faculty so often that it deserves individual infamy.”

Among other offenses, the Rensselaer administration has charged students handing out flyers critical of the administration on campus with “solicitation” and denied students permission to peacefully protest, despite the student handbook’s assurances of  students’ right to protest peaceably. FIRE and the New York Civil Liberties Union pointed out that the university was enforcing a policy against handing out handbills that doesn’t even exist.

Rensselaer joins only one other school, Chicago’s DePaul University, as having received FIRE’s Lifetime Censorship Award.  “We couldn’t think of a more worthy recipient than the Sensational Sentinels of Censorship of Troy, New York,” the foundation said.

It said Doane University committed one of the biggest free-speech offenses when it suspended faculty librarian Melissa Gomis for creating a historical photo display with pictures from the school’s photo collection depicting Halloween and other party costumes for the purpose of discussion in the national debate on offensive costuming. The photos included two university-owned photos of students appearing in blackface in  the 1920s. The college investigated Gomis on a charge of “discriminatory harassment,” which requires a series of ongoing, targeted conduct.

Syracuse University was cited for viewpoint discrimination for its refusal to recognize the conservative student group Young Americans for Freedom, while Long Island University Post was faulted for  investigating a student who allegedly handed out flyers containing poetry criticizing the administration. The student denied having done so.

Since the Philadelphia-based nonprofit FIRE began calling out colleges and universities for their infractions against free speech, it has recognized that some schools have improved enough to be removed from the list. Others are perennial repeat offenders.

Jonathan Butcher, a senior policy analyst with The Heritage Foundation’s Center for Education Policy, urges state governments and university governing boards to combat the abridgement of free speech on college campuses by considering imposing consequences for anyone, including students, who shuts down a speaker or otherwise violates someone’s expressive rights.

“State policymakers in Alabama, Arizona, Georgia, North Carolina, and Wisconsin have adopted proposals such as this that pair such sanctions with due-process protections for those accused of violating another person’s First Amendment rights,” he said. “This protects everyone involved with a speech-related incident.”