Why Trump Says Give Middle East Peace a Chance 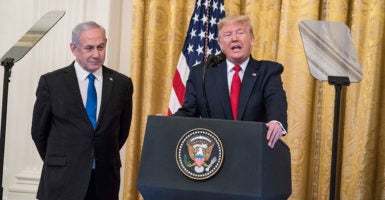 It’s called the Holy Land, a land of miracles. It’s where Jesus raised Lazarus from the dead. And conventional wisdom holds that President Donald Trump has about as good a chance of replicating that feat as he does of reviving the Israeli-Palestinian peace process.

The administration’s latest peace plan has already been flat out rejected by the Palestinian Authority, which administers part of the West Bank, and the Hamas regime in Gaza, which seeks Israel’s destruction.

As for the Israelis, making peace in our time seems a stretch. They can’t even form a government.

Still, there are good reasons for the U.S. administration to offer a peace plan and offer it now.

What Trump is putting on the table is, in essence, a Marshall Plan to help the Palestinian people. And it’s a very big investment—proportionally even larger than what we put forward for rebuilding Western Europe after World War II.

In return for that investment, the plan proposes some significant land concessions from the Palestinians and a long list of compromises to be made by both sides.

This is no slap-dash scheme thrown together so the administration can say “See, we tried.” They spent a lot of time on this; they talked to a lot of people, and they culled what they felt were the most promising and realistic elements from past peace proposals. This is, in other words, a serious plan.

Still, with relations between Palestinian authorities and Israeli officials at a near nadir, the obvious question is “Why bother? And why now?”

The administration started with some bold and radical assumptions. The most important, and likely the most accurate, was that it was stupid for the U.S. to seem like a neutral disinterested party. Nobody ever believed that.

Israel has been and remains a vital America ally in the region. The U.S. will always put the security of Israel first; that is just a reality. Washington isn’t about to support a plan that is going to hamstring or undermine the capacity of Israel to defend itself.

Trump also rightly rejected the fiction that a Palestinian-Israeli peace was key to solving all the problems of the Middle East—that somehow, as soon as a two-state solution was signed, the entire region would blossom into a tranquil land of milk and honey.

Unconstrained by the great myths of the peace process, the president could set about putting forth a realistic plan. Here is why unveiling that plan now makes sense.

There will be no peace as long as groups like Fatah, Hamas, and the Islamic Jihad call the shots. They have a vested interest in preventing peace. If there were peace, they could no longer rob the Palestinian people blind, run their criminal enterprises, and serve as paid stooges of Iran. There is no money and power for them in peace.

The genius of this plan is it makes clear to the people in the streets the future they could have if they take control of their future away from the likes of Fatah. It creates pressure for political transformation.

Couple that with the enormous pressure the U.S. is placing on the Iranian regime, and it increases the likelihood that the strings tying the mullahs’ regime to extremist surrogates throughout the region will snap sooner rather than later. Essentially, the U.S. administration is trying to lay the groundwork for a political environment in which Palestinian leaders might one day put the Palestinian people first—not last.

Laying this deal out there also makes clear to America’s Arab friends and allies that the U.S. is serious about continuing to engage in the Middle East and be part of the solution, as opposed to absenting America and thereby aggravating the problem.

A serious commitment to the peace process should buy the more goodwill and confidence in American leadership—perhaps not on the Arab street, but certainly among the Arab governments sick of Iran’s troublemaking.

Finally, let’s be honest: This plays well here at home. The plan is yet another reminder that this president is not an isolationist. He is not withdrawing from the world stage. He wants to be a peacemaker, not a troublemaker. And, he is not going to compromise on the security of America’s closest ally in the region.

Trump may yet raise the peace process from the dead. That won’t be the result of a miracle, but of many more months and years of consistent diplomatic effort.