5 Takeaways From the Latest Budget Projections 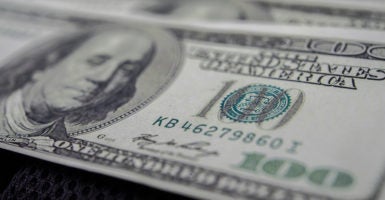 The Congressional Budget Office projects that debt will rise to historically high levels, with no end in sight. (Photo: Prakasit Khuansuwan /EyeEm/Getty Images)

The Congressional Budget Office has released its budget and economic projections for fiscal years 2020-2030.

The latest report confirms what the Congressional Budget Office has been telling lawmakers for years: The nation is hurtling toward a spending-driven debt crisis.

Without major reforms to mandatory spending programs, it is not a question of if, but when, all Americans will feel the financial impacts of Congress’ spending addiction.

The Congressional Budget Office projects the annual budget deficit will surpass $1 trillion (4.6% of gross domestic product) in fiscal year 2020 and rise to over $1.7 trillion annually by the end of the decade. Cumulative deficits will top $13.1 trillion from 2021 to 2030.

To be clear, the increase in projected deficit and debt levels is not a matter of the federal government taking in too little revenue. Revenues are projected to keep rising from 16.4% of GDP in fiscal year 2020 to 18% of GDP in 2030—higher than the 50-year average.

Here are five takeaways from the Congressional Budget Office’s budget and economic outlook:

According to Office of Management and Budget data, the highest level of debt held by the public ever recorded in the U.S. was 106.1% of GDP in 1946—in the immediate aftermath of World War II.

It is “unprecedented” for the country to be facing such high levels of debt in a time of relative peace and economic prosperity.

Over the next decade, the Congressional Budget Office estimates entitlement spending will rise by a combined 2.7% of GDP. Health care programs and Social Security are projected to consume 59% of all federal revenues by 2030.

Besides net interest payments, the Congressional Budget Office projects all other areas of federal spending to decline as a percentage of GDP.

Both Medicare and Social Security are unsustainable in their current forms and on a path to insolvency. Congress should fundamentally reform these programs to lower costs and return control over health care and retirement needs to the American people.

Without action to slow the growth of entitlement spending, it will be nearly impossible to achieve a sustainable federal budget.

By the end of this decade, the Congressional Budget Office estimates the federal government will spend $819 billion annually on interest payments on the national debt. That is more than double what the government spends on interest today and will amount to 10% of total projected spending in 2030.

The Congressional Budget Office estimates that in the next 10 years, the federal government will begin to spend more money annually on debt service payments than it will on either Medicaid or the Disability Insurance program. Interest costs would approach the level spent on national defense.

The first step to reversing this trend is to ensure that lawmakers know the interest costs of legislation that comes before Congress. Under current scoring rules, interest payments are not included in cost estimates. Lawmakers should enact reforms requiring interest costs to be included in all Congressional Budget Office estimates, giving Congress a fuller picture of the impacts of its spending decisions.

4. Revenues have been growing.

Some will attribute rising revenues to the expiration of the 2017 tax cuts. But revenues will continue to grow even if the tax cuts are made permanent because Americans get wealthier over time, meaning more of our paychecks will be taxed at higher tax rates.

Rising deficit and debt levels point to a spending problem. If Congress allows the tax cuts to expire, deficits will likely grow even faster than projected. Historically, tax increases are paired with increased spending, not deficit reductions.

Projected debt of nearly 100% of GDP should serve as a sobering warning to lawmakers. But if Congress ignores that warning, the Congressional Budget Office’s long-term projections get even more dire.

The Congressional Budget Office estimates that without reforms aimed at lowering the debt, debt held by the public will rise to a projected 180% of GDP in just 30 years. The report warns that “growing debt would dampen economic output over time” and “pose significant risks to the fiscal and economic outlook.”

This could leave lawmakers with few options other than significantly raising taxes on all Americans, meaning less opportunity and economic prosperity for future generations.

The Congressional Budget Office’s latest budget and economic outlook reiterates that the current budget path is unsustainable. There is no time to waste. Congress should act now to implement reforms that will reduce federal spending and stabilize the national debt.

If lawmakers fail to heed these warnings, all Americans will pay the price.