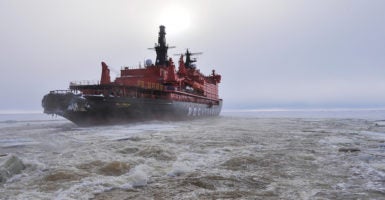 The 50 Let Pobedy nuclear-powered icebreaker operated by Atomflot makes its way through the frozen waters of the Gulf of Ob in the Arctic. (Photo: Lev Fedoseyev/TASS via Getty Images)

Aggression by Iran and trade with China may dominate U.S. foreign policy headlines, but a plan recently announced by Russia to increase its presence in the Arctic should command our attention.

Plan NSP, approved by former Russian Prime Minister Dmitry Medvedev on Dec. 21, “includes as many as 84 points and covers a wide range of priorities, from the development of needed infrastructure and building of new ships to the mapping of natural resources and launch of new satellites and meteorological equipment.”

The plan, designed to make Russia more mobile, resourceful, and powerful in the Arctic, calls for starting the project this year and completing it by 2035.

The plan states that it is in accordance with the decree of the president of Russia, dated May 7, 2018, which declares that Russia needs to increase cargo flow through the Northern Sea Route by at least 80 million tons.

In 2018, 18 million tons travelled across the coastline—an 80% increase from 2017. In 2019, 26 million tons of cargo passed through the area. With Plan NSP in place, land, air, and sea routes will become available for the transportation of both goods and people.

This should not surprise anyone, because Russia in recent years has steadily increased its military and economic presence in the Arctic in search of economic opportunity and sought militarily to make the Arctic its own. In 2007, the Russians even planted their flag at the bottom of the Arctic Sea under the North Pole.

In addition, Russia has either renovated or built from scratch at least seven military bases in the region. It broadcast that Siberian huskies would be trained to pull military personnel and equipment into areas where military vehicles cannot handle the terrain and disclosed it planned to install an “air defense dome” made of S-400 missiles all across the region.

Although much of Russia’s Arctic progress in the last few years has been dedicated to security, Plan NSP focuses heavily on the potential for greater economic involvement in coming years. The plan calls for a Northern Sea Route, which Russia hopes will become a boon to a stagnant economy.

According to the plan, within the first half of this new decade, the Russian government will decide whether to continue building several rail lines across the country. By the end of 2022, the decision will be made whether to continue the Belkomur railway line that would link Perm in the Ural Mountains to the Arctic port city of Arkhangelsk.

It also will decide on rail lines from Sosnogorsk to Indiga, from Sabetta to Novyj Urengoj that also could serve to boost Arctic commerce, as well as one that would run across the River Ob to Novy Urengoy and Nadym. The government also plans to finish the Murmansk Transport Hub, with a 46-kilometer railway and several port facilities all along the west of Kola Bay, by December of 2021.

Four civilian airports will be upgraded in the coming years: Amderma in the west and Pevek, Chersky, and Keperveyem in the east. Additionally, a dredging operation in the Gulf of Ob, scheduled to be completed in December 2021, will allow for larger vessels to pass through.

Finally, perhaps the most significant aspect of the plan is the launch of at least 40 new Arctic vessels, including eight nuclear-powered icebreakers and 16 rescue and support ships by 2035. Some of these ships will be Lider-class ice breakers, allowing them to break through extremely thick Arctic ice and open wide enough shipping lanes for large commercial ships.

The United States and its Arctic allies would do well to closely follow not only Russian militarization of the Arctic, but also planned economic investments in the high north. The plan is an ambitious effort to expand Russia’s presence in the Arctic, but how much of that plan comes to fruition remains to be seen.

What is clear is that the way the Arctic continues to drive Russian strategic thinking should concern the U.S. and its allies.