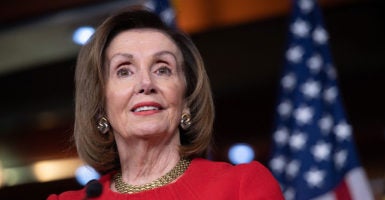 House Speaker Nancy Pelosi has revealed that Democrats on the House Judiciary Committee will introduce and vote on the so-called NO BAN Act. Pictured: Pelosi holds a press conference on Capitol Hill in Washington, D.C., Dec. 19, 2019. (Photo: Saul Loeb/AFP/Getty Images)

Pelosi revealed in a press release on Monday that Democrats on the House Judiciary Committee will introduce and vote on the so-called NO BAN Act, which would limit the White House’s authority to impose travel restrictions on foreign nationals, in the next few weeks.

Introduction of the bill comes roughly three years after the president introduced his first travel ban, and follows confirmation that he plans to add more countries to the list.

“House Democrats continue to stand opposed to President Trump’s cruel, un-American travel ban in all of its iterations. In the coming weeks, the House Judiciary Committee will mark up and bring to the Floor the NO BAN Act to prohibit religious discrimination in our immigration system and limit the President’s ability to impose such biased and bigoted restrictions,” Pelosi said Monday.

“In his last address as President, Ronald Reagan warned that ‘If we ever close the door to new Americans, our leadership in the world would soon be lost.’ House Democrats are working tirelessly to uphold our role as a global leader and a beacon of hope and opportunity for countless people around the world,’” the speaker continued.

While such legislation would likely pass the Democratic-controlled House, it faces a very uncertain future in the GOP-controlled Senate.

Trump introduced his first travel ban via executive order in January 2017, nearly immediately upon entering the Oval Office. That ban was later blocked by a federal court. A similar chain of events took place after Trump issued a second travel ban. However, it was his third ban that proved successful—surviving a challenge all the way to the Supreme Court in June 2018.

The travel ban restricts travel from seven countries: Syria, Iran, Libya, Yemen, Somalia, North Korea, and Venezuela. The fact that most of the countries have majority-Muslim populations, detractors of the executive order have deemed it a “Muslim ban.”

Trump confirmed earlier this month that the administration is working on expanding the travel ban. Countries to be added to the list reportedly include Sudan, Nigeria, Eritrea, Tanzania, Kyrgyzstan, Myanmar, and Belarus. However, the level of restriction is expected to vary from country to country.

In her Monday statement, Pelosi expressed disdain at the idea of expanding the scope of the ban.

“Today, reports indicate that the Administration is once again preparing to expand its dangerous travel ban, threatening key international relationships and jeopardizing our ability to fight terrorism and extremism at home and abroad,” she wrote. “Despite the Administration’s hateful policies and dangerous rhetoric, this fundamental truth remains: immigrants make America more American.”