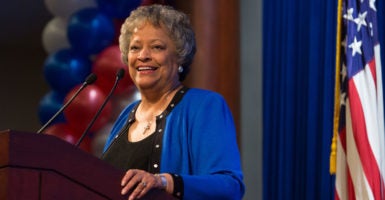 "The far left despises so much that they’re even willing to rewrite whether America is exceptional among the nations," Heritage Foundation President Kay C. James, pictured at another event, says Thursday at the Conservative Political Action Conference. (Photo: Willis Bretz for The Heritage Foundation)

A personal connection to their cause drives her daily, Heritage Foundation President Kay C. James told a gathering of young, pro-life Americans in Washington.

“When you have been at this for 40 years, you cannot imagine the joy of seeing a crowd this size,” James said Saturday to more than 3,000 attendees, most of them high school or college students, at the National Pro-Life Summit.

The event was a one-day training conference for pro-life leaders sponsored by Students for Life of America, Live Action, The Heritage Foundation, and Alliance Defending Freedom.

James, who held key positions in federal and state governments beginning in the 1980s, said the issue of abortion was her greatest motivation to pursue improved public policy.

“I got into government and public policy because of the life issue, and when I’m 90 years old, that’s the issue that’s going to get me out of bed in the morning,” she said in her speech at the Marriott Marquis, titled “Life and Leadership.”

James recalled that during a debate on abortion, she asked her opponent how she would counsel a poor woman, pregnant with her sixth child, whose husband was an abusive alcoholic.

Her debate opponent replied that abortion would be the most loving choice for the abused woman, the children she already had, and the child she carried.

“I had the privilege to say to her, ‘I have a vested interest in how you would counsel that woman, because that woman was my mother, and the child she carried was me,’” James said, receiving a standing ovation that lasted nearly a minute.

“That woman had no idea the plans and purposes that God had for my life, that I would have the opportunity to dine with kings and princes, to serve presidents, and be the president of The Heritage Foundation. When I speak, I speak for those children.”

Although there are many important policy issues, James said, the right to life is foundational:

We can fight for strong national defense, but to defend what? We need to defend the right of every American citizen to be born and live, and walk in love among us. And we will fight constantly for free trade and free markets and civil society, but those things are only important if you have the right to live.

James concluded by calling her audience to “fearless” involvement in the pro-life movement through financial support, bringing more people into the cause, voting for pro-life candidates, and praying.

“I need you to be absolutely fearless as you fight for life.”