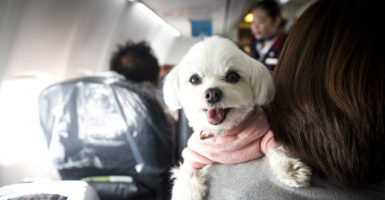 The Department of Transportation has announced new guidelines for service animals on planes that limit the protected service animal category to dogs with specific training to help a person with a medical disability. Pictured: A dog on the shoulder of its owner in a plane in Chiba, Japan, on Jan. 27, 2017. Japan Airlines "wan wan jet tour" allows owners and their dogs to travel together. (Photo: Richard Atrero de Guzman/Anadolu Agency/Getty Images)

Not many of us want to drive behind “turkeys” on the roads. Even fewer want to sit next to actual turkeys on a flight. Thanks to new action by the Department of Transportation, the public can avoid having planes look like petting zoos.

Trained service dogs, such as seeing-eye dogs, are necessary for the day-to-day life of thousands of Americans. Over the years, canines’ remarkable gifts have extended to assist those afflicted by diabetes, neurological problems, mental health conditions, and life-threatening allergies.

To accommodate people who require service animals to accompany them at all times, the Department of Transportation has stipulated that airlines must allow them on flights. This caused minimal disruption at first, since properly trained service dogs are extremely well-behaved.

But since the federal guidelines were not specific enough, some pet owners and medical professionals began to label untrained pets as “emotional support” animals. Airlines hesitated to crack down on these abuses for fear of violating federal statute.

This led to an explosion in the number of animals on flights (1 million in 2018 alone). In addition to all manner of dog breeds, inconsiderate passengers dragged along emotional support cats, miniature horses, pigs, ducks, rabbits, and even peacocks.

Needless to say, airplanes are not designed for this. Under-trained animals can create problems such as incessant noise and messy defecation. Worse, the conditions of a cramped plane can cause distressed dogs to lash out violently. These incidents have become all too common in recent years.

Thankfully, the Department of Transportation has announced new guidelines for service animals on airplanes that limit the protected service animal category to dogs with specific training to help a person with a medical disability.

The new rule, currently in the public comment phase, would give airlines the option of whether to allow emotional support animals on their planes.

There is no federal ban. If Delta wants to allow a therapeutic wombat on board, Uncle Sam will not get in the way.

If some airlines crack down, others can market themselves as pet-friendly. Rather than using the federal government to force airlines to allow these animals on board, we should trust airlines and passengers to find what works best through the marketplace.

That’s exactly what the new rule seeks to accomplish, and both two-legged and four-legged Americans will be better off for it.