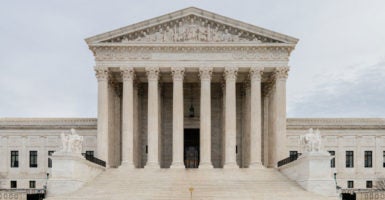 A 2017 Supreme Court decision suggests that there might be as many as seven judges on the same side of this decision about religious schools and tax credits. (Photo: Getty Images)

Should families be able to use school choice tax credits on religious schools? That’s the question that’s at the heart of Espinoza v. Montana Department of Revenue, which the Supreme Court is hearing Wednesday. Heritage Foundation legal scholar and host of the podcast “SCOTUS 101” Elizabeth Slattery breaks down the case for us. Read a lightly edited transcript of her interview, or listen on the podcast:

Daniel Davis: Well, it’s a big day at the Supreme Court, where the justices are hearing arguments in a case involving religious schools. The case is Espinoza v. Montana Department of Revenue. Joining me to break it down is Elizabeth Slattery, a legal fellow here at The Heritage Foundation. Elizabeth, thanks for coming in.

Elizabeth Slattery: Thanks for having me.

Davis: So this case is out of Montana. What exactly is the dispute over?

Slattery: Back in 2015, the Montana Legislature set up this tax-credit scholarship program that would provide scholarships for income-eligible children to use at qualified schools, private schools.

Initially, recipients could use the scholarship funds at any qualified school, including religious ones. But then the Montana Department of Revenue implemented a rule to exclude religious schools, citing a provision in the Montana Constitution that bars state funds from aiding religious organizations.

Parents were relying on these funds to send their children to religious schools and they sued in state court. And that is the case that’s up at the Supreme Court.

Slattery: Yeah. So, the parents raised federal constitutional claims in addition to some state law issues. And what the Montana Supreme Court ended up ruling was, it struck down the tax-credit program in its entirety.

It said that, “Look, when the Legislature set this up, they were allowing funds to go to religious schools and our Constitution says that you can’t do that.” And so they struck down the program in its entirety. So no children can use the scholarship program right now.

Davis: You’ve written that the Supreme court’s recent ruling in the Trinity Lutheran case from 2017 might be relevant here as a precedent to maybe correct this ruling or overturn it. Can you explain that?

Slattery: Sure. Trinity Lutheran was a case out of Missouri from back in 2017. And that case involved a day care center that was run by a church. And they wanted to apply for this state-funded grant to help them resurface the playground at the day care center. But they were denied the grant solely because it was brought by a religious institution.

Missouri, likewise, has what’s called a no-aid [amendment] or a Blaine Amendment. Some people call them that in their state constitution. And this case went all the way to the Supreme Court. And the court held that Missouri had violated the federal Constitution by discriminating against an organization solely on the basis of religion.

Davis: So the parents in this Montana case, they’re going to argue the same thing. They’re going to say that this tax credit is a generally available public benefit and that, therefore, they should be able to use it to go toward religious schools?

Slattery: Yeah. And there’s an additional wrinkle here, particularly with regard to the no-aid provision because what we’re talking about here is a tax credit. So it isn’t actually state money that’s flowing to the schools. It’s people giving money to a scholarship-granting organization and then the money goes into the hands of a private actor or the parents to decide where to use that money.

And the Supreme Court, the U.S. Supreme Court has long held that there’s a distinction between direct government funding of religion and indirect funding such as a tax credit, in this case.

Davis: Zooming out, big picture, what’s really at stake in this case for other Americans who aren’t involved in this particular case?

They’re also called Blaine Amendments … named for Sen. James Blaine, who tried to get the federal Constitution amended to prevent funds from going to what he called “sectarian” schools. And this was a code word for Catholic schools because he didn’t want funding of Catholic institutions or Catholic schools.

A number of states have these amendments. So you can see … in the Montana case how they can conflict with school choice efforts. And really this case is about just trying to allow parents to decide what the best educational opportunity is for their children and using programs like this tax-credit program to give their kids the best education that they can.

Davis: Right now the court is considered conservative by a 5-4 majority. What outcome should we expect from this case?

Slattery: Well, if we look at the Trinity Lutheran case from a couple of terms ago, that’s when Justice [Neil] Gorsuch had just joined the Supreme Court. Justice [Anthony] Kennedy was still on the bench. So we have switched Kennedy for [Justice Brett] Kavanaugh. But that was a 7-2 ruling.

So Justices [Elena] Kagan and [Justice Stephen] Breyer joined with the so-called conservative members of the court to uphold the First Amendment and to find that what the state of Missouri had been doing was religious discrimination. So we could see a similar breakdown in this case.

Justice [Sonia] Sotomayor wrote a dissent back in Trinity Lutheran and Justice [Ruth Bader] Ginsburg joined her saying that they thought that the Trinity Lutheran case weaken the separation of church and state. But we’ll see what happens in this one.

Davis: And then with Kavanaugh, I would assume he’s even more likely to go conservative in this case?

Slattery: Based on his jurisprudence from the D.C. Circuit and the limited jurisprudence we have from the Supreme Court, he has been strongly in line with the conservatives when it comes to establishment clause and other First Amendment cases. So it’s hard to predict how cases are going to turn out because you never know what might happen. But I think that there is affirm majority that will rule to side with the parents in this case.

Davis: If that happens, does that automatically amend the other state constitutions that currently ban this practice?

Now, interestingly enough, the Trump administration filed a “friend of the court” brief supporting the parents in the Montana case. And they say that these no-aid provisions should be struck entirely, but the parents who are the litigants in the case didn’t go quite that far in what they were asking the Supreme Court to do.

Davis: When should we expect the ruling?

Slattery: It’ll be by the end of June most likely. That’s when the court will wrap up for this term. And they have been issuing opinions, some of the ones from the fall setting.

I think since this is going to be argued in January, we may not see an opinion until maybe April at the earliest. But it may not be until the very end, which is the last week of June.

Davis: All right. Well, we’ll wait to see how the arguments go. If you want to listen to more of Elizabeth’s analysis of cases like this, check out her podcast “SCOTUS 101.” Elizabeth, thanks for your time today.

Slattery: Great to be here.