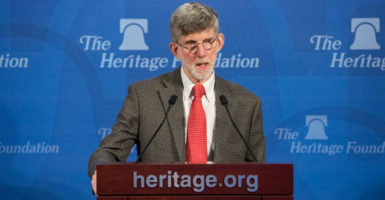 Reforming journalism is about making good journalism that is factual and original, a renowned magazine editor and author says.

“We like being flies on the wall, watching and listening,” Marvin Olasky, editor-in-chief of World magazine, said Wednesday at an event at The Heritage Foundation, adding:

Olasky, a former atheist and Marxist who converted to Christianity, has written more than 20 books, including “The Tragedy of American Compassion” and his latest book, “Reforming Journalism,” which asks the question of whether “powerful, biblically principled journalism” is “a lost art.”

He identified several practices for producing the best journalism, including on-the-ground reporting, or “street reporting,” rather than “suite reporting,” and sprinkling salt, not sugar, by exposing the truth and not trying to cover it up.

“Sometimes, people are forgetting the divide between good journalism, of actually going out and really trying to honestly report what’s going wrong, what’s going on, without doing it in a way that’s designed to popularize, publicize a particular group or organization or individual,” Olasky said. “And sugar isn’t very helpful, either. [That] just gives us sugar fixes, and you switch statements off, and cover up the truth. [That’s] not good journalism. That world, we try to be salt. Salt has taste.”

He also urged avoiding entangling alliances, as well as creating quality content rather than clickbait, remembering the mission, and being faithful to that mission.

“We do try to take strong stands when the Bible is clear,” Olasky said. “We avoid doing so when the Bible isn’t, and we have the opportunity to get things right by trying to practice biblical objectivity. But now Christians are not immune to the temptations and pressures that affect other journalists.”

He also discussed what biblical journalism means in his perspective, and how he pursues ethics in that field.

“Really, all [worthwhile] reporting and writing is based on the understanding that God is holy, we are sinners, Christ’s sacrifice bridges the gap,” Olasky said, adding:

The heavens declare the glory of God, but the streets proclaim the sinfulness of man. So biblical journalism emphasizes God’s holiness and man’s sinfulness. And we try to do this, again, being very careful not to mischaracterize, abuse, or think of our opponents as forever enemies.