North Korean Christian Martyr: ‘Even If I Die, I Do Not Have Any Regrets’ 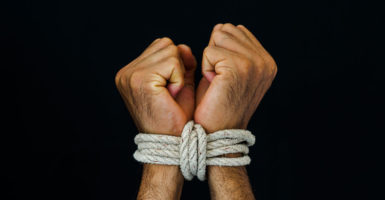 “Even in the midst of ... horrible tortures, he had compassion for those who did not know about Jesus Christ," recalls a North Korean martyr's wife. (Photo: Getty Images)

“I’m a believer,” she says, “because of my husband, because of the things he told me and my children about Jesus. ‘You cannot see Him,’ he would say, ‘but He is alive and working.’”

That became harder to believe when he was taken from them, locked away in a prison where he would die.

“The torture he went through was so gruesome that it is unimaginable,” she says. Every single day, the guard would come and punish him for his faith, “with blood,” she explains quietly, “everywhere.”

But “even in the midst of these horrible tortures, he had compassion for those who did not know about Jesus Christ,” Hae Woo remembers. “He went into the prison walking, but after all the torture, he was dragged loose on the ground … . Although his body was all torn apart, he handed the last pieces of rotten corn that he had to his prison mates. He spread the Gospel to the inmates.

“He prayed for the sick, [and] as he continued the good work, God built an underground church in the prison through my husband.”

One of the last times her children saw him, she thinks back, “he wanted to pass on his faith, but there were guards everywhere. So, he did something simple and profound. He wrote three words on his hand: ‘Believe in Jesus.’”

Not long after, he was killed by prison guards for giving that same advice to others. “Even if I die,” he had told her, “I do not have any regrets.”

Today, a lifetime after Hae Woo was hauled into prison to experience the horrors for herself, very little has changed. David Curry of Open Doors USA told me on “Washington Watch”: “Every year, I keep hoping that we’ll have some signs that [the persecution of Christians] is receding. But all of the driving forces … that are oppressing the expression of faith—all of these things are still in place.”

In North Korea, which is once again at the top of Open Doors USA’s 2020 World Watch List, nightmares like Hae Woo’s aren’t rare.

The Christian community is significant there, he explains, but they’re “deeply underground.”

“There are many Christians,” he explains, but “they’re facing every kind of pressure you can imagine.”

Tens of thousands of Christians are in labor camps—a nightmarish place that Hae Woo describes as like Nazi-era holdovers.

“Each person received one handful of rotten corn, [and] there was nothing else to eat. We got something watery. It wasn’t even a soup. We got those as food for the whole year. Nothing else. People are obligated to work more than cows or animals.”

Usually, they’re on the verge of death. They’ve been starved, beaten, and abused.

They’re there, Curry explains, for things Americans take for granted every day: owning a Bible, being a Christian, or talking about their faith.

“The reality [is] to be registered as a Christian or to be thought of as a Christian, it means you are the No. 1 enemy of the state,” he said.

In the Middle East and Africa, places like Afghanistan (No. 2 on the list), Somalia (No. 3), and Libya (No. 4), the situation isn’t much better.

The punishment for being a Christian is quick and decisive.

“It’s not uncommon for believers to be beheaded. There’s no trial,” Curry said. “There’s no kangaroo court [or] anything like that. This is where Islamic extremism really shows itself in that top 10 and even beyond, so many of these countries …

Here at home, where practicing our faith is second nature—something we never think twice about—it’s hard to imagine a life of constant terror.

If anything, that should drive us all to our knees—in gratitude, for one thing—but also for our brothers and sisters overseas.

“Every year,” Curry said he wanted people to know, “there are silver linings. Faith is growing deeper in these places where people are being persecuted for serving Jesus. Communities are getting smaller but stronger. And I think it’s causing people to [reflect] on the cost to faith.”

When I asked him what people can do, miles away from the stories like Hae Woo’s, Curry’s answer was simple.

“We need everybody praying,” he said. “I would love to see people pray daily—even, at a minimum, weekly—for the persecuted church.

“Adopt a country, a cause, a person. Let’s pray. Let’s talk. Let’s advocate for these individuals and make a big difference.”