Europe Has Free College. Here’s How It’s Working Out. 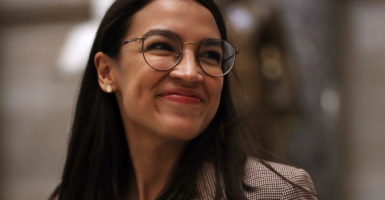 Rep. Alexandria Ocasio-Cortez, D-N.Y., is one of the lawmakers who has called for public colleges to be tuition-free. (Photo: Alex Wong/Getty Images)

To make the idea sound even more appealing, advocates continuously cite Europe as an example of success. Many European countries offer their citizens tuition-free higher education, so why can’t America?

The truth is that free college in Europe is no success story. Rather, it should serve as a cautionary tale for the United States.

European-style tuition-free higher education has proved one thing beyond the shadow of a doubt: “Free” college is actually wildly expensive.

Americans already pay a steep price for our higher education system. Taxpayers—including those who never went to college and never intend to—spend more than $150 billion a year on federal student loans, grants, and other government programs.

The increasingly hefty price tag attached to college tuition reflects the fact that colleges have no incentive to keep their prices low because students can so easily take out massive loans from Washington.

One of the few factors putting any downward pressure on higher education costs is the growing criticism that universities receive for leaving so many students burdened with massive amounts of student loan debt.

Under a fully financed government system, however, universities would receive no such scrutiny. They’d simply pass the bill to Washington and let lawmakers take the heat from unhappy taxpayers.

That cumulative bill would quickly skyrocket. Many European countries that have experimented with “free college” are finding that approach to be simply unaffordable. Germany, for example, saw a 37% increase in the college subsidy cost to taxpayers once public universities removed tuition.

Similarly, England had a free-college policy between the 1960s and the 1990s. Enrollment soared, straining government revenues. Ultimately, England had to lower resources by 39% per student.

Ultimately, England’s free college policy wound up hurting low-income students the most, as schools were forced to cap the number of students admitted.

In fact, according to researchers at the National Bureau of Economic Research, “the gap in degree attainment between high- and low-income families more than doubled.”

European countries that offer tuition-free higher education also struggle with the issue of completion. Finland, for example, ranks first among all Organization for Economic Cooperation and Development countries in terms of subsidies for higher education, with 96% of all higher education funding coming from public sources. However, Finland ranks 25th among OECD countries for degree attainment.

France famously touts its tuition-free university system. Seldom, however, do advocates boast that almost 50% of French students drop out or fail out after just their first year.

It is clear that transferring the entire cost of higher education from students to taxpayers is fraught with unintended consequences.

Countries such as England and Poland actually saw significant increases in higher education quality and access after reinstating private tuition payments in their countries. It appears that there is some value in requiring students to invest in their own education.

Given the increased tax burdens placed on taxpayers (including those who don’t hold degrees), the significant overcrowding, and high dropout rates, European-style free college should largely be considered a public policy failure.

The $1.5 trillion in outstanding student loan debt that Americans owe is certainly a crisis. However, the solution to this problem is not to encourage more students to attend who may later drop out and ask Americans who did not go to college to pay for those who do.

This would fuel inefficient higher education spending and weaken the integrity of our colleges and universities.

The solution, in America as in Europe, is to put individuals rather than governments in charge of higher education financing.