Taiwanese Presidential Election Is a Victory for Democracy 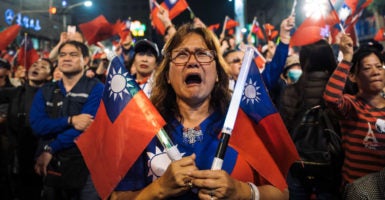 Friends of Freedom, all hail a modern-day David—tiny, democratic Taiwan—which continues to confound its big bully of a neighbor—communist China.

Tsai calmly responded that her government was prepared to start a dialogue with Beijing if the communist regime respected Taiwan’s sovereignty and democracy.

Fuming at such insolence, the government-run Xinhua News Agency directly warned Tsai and her Democratic Progressive Party “not to act willfully and rashly because of a temporary fluke.”

So much for free and open elections, a vigorous two-party political system, and an independent news media, all of which prevail in Taiwan.

A panel of China experts meeting at The Heritage Foundation agreed that the election provided new opportunities for U.S.-Taiwan relations, starting with a free trade agreement between the two countries.

One panelist suggested that the U.S. might reconsider its 1979 action of recognizing China and move toward Taiwan, short of formal recognition. For example, a national committee on U.S.-Taiwan relations could be started, or an assistant secretary of state position for Taiwan might be created.

Stanley Kao, Taiwan’s “ambassador” to the United States, said the presidential election demonstrated that democracy works—and works well—in Taiwan because “we don’t take it for granted.”

Tragically, the Chinese Communist Party, 90 million strong, ruthlessly stamps out the smallest sign of democracy on the mainland. Meanwhile, Taiwan stands out as a brilliant beacon of democracy, infuriating Beijing, which does not dare take direct action so long as the Taiwan Relations Act ensures that the U.S. supports a peaceful resolution of the China-Taiwan conundrum.

Tsai and her colleagues are to be congratulated for trusting the people of Taiwan to reject Mao Zedong’s axiom that “political power grows out of the barrel of a gun” and to put their faith in the ballot box and the democratic process.