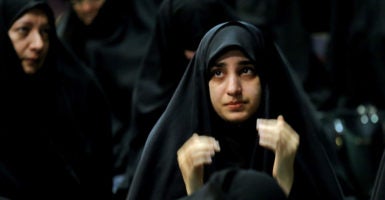 Though Iran does possess a huge missile arsenal, its failed strike last week—and incidental attack on Ukrainian Flight 752—suggest that the nation still lacks the ability to use its weapons effectively. Pictured: Supporters of the Basij, a militia loyal to the Islamic republic's establishment, attend a memorial for the victims of the Ukraine plane crash at the University of Tehran Jan. 14, 2020. (Photo: Atta Kenare/AFP/Getty Images)

Iran fired missiles at two U.S. bases in Iraq on Jan. 8, setting off a wave of speculation in the American media. Now that the dust has settled, analyzing the strikes can provide important insights into Iran’s intentions and capabilities—and how the United States should respond.

In the immediate aftermath of the attacks, many commentators were quickly bogged down by the question of whether the Iranian strikes were meant to be precise.

Many experts cited the (presumed) Iranian strike against Saudi oil infrastructure in September as an example of precision, then concluded that Iran’s attack against the two bases was also a precision strike, carefully calibrated to avoid casualties.

Yet these reports largely overlooked the difference between cruise missiles—which Iran possesses in large numbers—and ballistic missiles, which were actually used in the attack.

In general, Iranian ballistic missiles simply aren’t that accurate. Those fired at the bases could have landed on parking lots, warehouses, or even outside the facility entirely. Four of the 16 missiles fired failed to even hit their targets.

Cruise missiles, on the other hand, are far more sophisticated. Their advanced guidance technology makes them highly maneuverable, allowing them to evade radar detection and strike targets far more precisely.

Still, this distinction shouldn’t be allowed to obscure the facts of the case.

Yes, Iran fired missiles at U.S. positions. But the Iranians avoided taking more provocative action, such as launching precision strikes. At the end of the day, all parties involved were lucky that no one was hurt or killed.

Ultimately, whether the missiles were accurate or not, their use sheds significant light on Iran’s intentions and capabilities.

First, on the most basic level, the attack demonstrates not only that Iran has missiles, but that the nation is both willing to fire them and continues to develop them. That reality should encourage America’s strategic partners to begin thinking seriously about how to counter Iran’s behavior and strategic objectives.

But Iran also boasts a number of more impressive programs. Its cyber capabilities, its ability to refine uranium, and a large and growing missile inventory need to be taken seriously.

Third, having a capability and having the ability to effectively employ it are two different things.

U.S. forces possess world-class surveillance, detection, tracking, and reporting systems. Not only do these systems help the American military protect its assets, but they also ensure that such assets are much more effective.

Though Iran does possess a huge missile arsenal, its failed strike last week—and incidental attack on Ukrainian Flight 752—suggest that the nation still lacks the ability to use its weapons effectively.

But that doesn’t mean we should let our guard down. Instead, the Iranian attacks demonstrate that the United States should maintain a robust defense posture.

Despite some calls from across the political spectrum to decrease military spending, the U.S. faces threats across the globe, from rogue states, such as Iran, to ambitious rivals, such as China.

American forces must remain ready at all times to defend our nation’s interests, to defend themselves from attack, to counter enemy actions, and to support our allies and partners. By investing appropriately in defense capabilities, the U.S. can deter further bad behavior, Iranian or otherwise.