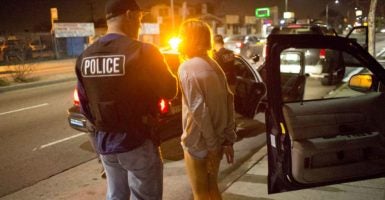 Americans need to be talking more about the problem of human trafficking in order to successfully combat it, the nation’s acting homeland security secretary says.

“We as Americans, again, are not talking enough about this issue,” Chad Wolf said during an event Wednesday at The Heritage Foundation, adding:

Let me make myself clear. In 2018, the U.S. National Human Trafficking Hotline reported nearly 11000 cases of human trafficking that same year. One of our essential partners in the nation’s clearinghouse, the National Center for Missing and Exploited Children, received more than 18.4 million reports of online child sexual exploitation and abuse. That’s over 50,000 reports per day.

Wolf assumed office in November as acting secretary of  the Department of Homeland Security.

He told his Heritage audience that the department’s launching of a comprehensive plan—called the Strategy to Combat Human Trafficking, the Importation of Goods Produced with Forced Labor, and Child Sexual Exploitation—meant ultimately to end the scourge of such practices.

“The strategy establishes ‘victims first’ as a DHS-wide policy,” he said.

“As a department, we’re going to continue to balance our law enforcement responsibilities with victim assistance specialists from Immigration and Customs Enforcement immediately attending to the needs of victims. The strategy directs us to train law enforcement to be trauma-informed and survivor-informed and understanding the victims of these crimes have experienced horrors that are sometimes unspeakable.”

A big part of the new strategy is working with tech companies to eradicate sexual abuse and human trafficking online, Wolf said.

“Our science and technology director will be developing new analytical software [and] digital forensic tools to address these crimes, such as those that begin to develop investigations of livestream abuse,” Wolf said.

The acting DHS secretary defined livestream abuse as when “children [are] forced to appear in front of a web-connected camera to be subjected to sexual abuse, which is then livestreamed over the internet.”

“As you can imagine,” Wolf said, “the nature of livestreaming of abuse makes it difficult for law enforcement to identify a victim.”

In order to respond to such crimes, he said, DHS is going to incorporate training on how to spot livestream abuse cases so they can be investigated and added to the agency’s advanced cybertraining.

It is important to collaborate with tech companies to make it easier to find and bring down human traffickers, Wolf said.

“Currently, when tech companies hand over information on child sexual exploitation for use by investigators, it’s often unreadable and unusable,”  he said. “This inhibits our law enforcement reaching children in danger quickly. Moving forward, we continue to partner with tech companies to find solutions to format that information as best as possible by law enforcement officers.”

Wolf also said that combatting human trafficking takes a toll on the officers who work on such cases day in and day out:

Imagine sitting behind a computer for eight or more hours a day, viewing child sexual abuse material, searching for clues to identify victims so that law enforcement can rescue children in serious danger.

Imagine being that officer [who] uncovers a group of workers living in slave-like conditions in a shed. Imagine the horrors that these individuals go through. This strategy is going to ensure that we place the health and well-being of our employees first.