Congress’ Animosity for Trump Is a National Security Hazard 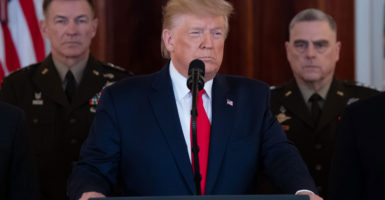 President Donald Trump speaks about the situation with Iran in the White House Jan. 8, 2020. He says Iran appears to be "standing down" after missile strikes on U.S. troop bases in Iraq that resulted in no American or Iraqi deaths. (Photo: Saul Loeb/AFP/Getty Images)

What do the Iranian people, who have turned out in droves to protest their own government, know that many members of Congress don’t? They realize it’s their leaders who represent a grave threat to the future of their own country and world peace, not the president of the United States.

Too many in Congress have let their personal disdain for President Donald Trump cloud their obligation to ensure the safety of Americans at home and abroad.

Some have apologized to the Iranian regime that has backed repeated attacks against U.S. personnel and our embassy in Iraq. A majority in the House even voted to condemn the president’s retaliatory strikes against Iran and tried to tie the president’s hands in any future military engagements—all while his strategy seems to be working.

In contrast to the regime-staged protests of last week, the real anger that we are seeing in the streets of Iran this week seems to be a validation of the administration’s actions.

The Iranian people have flooded the streets to protest the reckless shoot-down of the Ukrainian airliner filled with their fellow countrymen and the lies and denials coming from their own government to cover it up. They are calling for the death of their supreme leader, Ayatollah Ali Khamenei. They are also tearing down posters of Gen. Qassim Suleimani, the head of the terrorist arm of Iran’s Islamic Revolutionary Guard Corps, who Trump ordered killed with a drone strike on Jan. 3.

While many in Congress attacked the president for taking out Suleimani, the Iranian protesters this week showed the world that they not only saw Suleimani as an oppressor of his own people, but as the architect of Iran’s foreign policy of terrorism who used up the country’s blood and treasure, and subjected them to international sanctions that only made them poorer and more isolated.

Congressional critics are claiming that killing Suleimani was an illegal assassination, which it was not. The general was a lawful military target under both domestic and international law. He had led a campaign of terror for years that resulted in the deaths of more than 600 Americans by his own militias and thousands more American deaths and injuries by terrorist proxy groups he trained and supported.

Trump had ample authority under the U.S. Constitution as commander in chief to target Suleimani to defend Americans against ongoing and imminent attacks.

Yet, House Speaker Nancy Pelosi and others are angry that the administration didn’t consult Congress before taking out the general. They have pointed to the 1973 War Powers Act, which requires a president notify Congress within 48 hours of a military action and prohibits the military from remaining in a conflict for more than 60 days if Congress doesn’t authorize military force.

However, many legal scholars agree that the War Powers Act is unconstitutional. It infringes on the president’s constitutional authority to have sole control over the military.

Congress does have the power to check the president’s authority–specifically, it has the power to refuse funding for military actions it doesn’t approve of. Congress certainly should debate a president’s use of military force, and if our elected representatives have issues with those actions, they should use their funding authority to rein a president in. That would be the constitutional solution.

Trump’s actions, though, seemed to have been successful in tamping down Iranian aggression, and for now, it appears that any immediate escalation with Iran has been avoided.

The United States will continue to take actions, including increasing sanctions, designed to punish the regime for its behavior and prevent further escalation while offering it the option of going back to the negotiating table.

Trump has delivered a clear message to the Iranian government: “Your campaign of terror, murder, mayhem will not be tolerated any longer.” He promised to strike back if there were more attacks on Americans, and the regime seems to be listening.

These events remind us why the United States must maintain the best-equipped armed forces in the world and use firm diplomacy—backed by the credible threat of military force—to successfully thwart rogue regimes bent on America’s destruction.

While Congress has a role in ensuring that America doesn’t become entangled in unnecessary or illegitimate conflicts, it must also recognize when legitimate actions are taken for national security reasons, and it must reject letting politics get in the way of its sacred obligation to protect the American people.