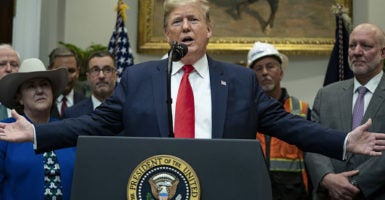 The administration proposed a new rule under existing law to expedite environmental reviews, cutting the length of review by more than half of the average of five-to-seven years per project.

The Trump administration has pushed an aggressive deregulatory agenda, and the president often has talked about streamlining environmental reviews.

“That is why, for the first time in over 40 years, today we are issuing a proposed new rule under the National Environmental Policy Act to completely overhaul the dysfunctional bureaucratic system that has created these massive obstructions,” Trump said.

Since President Jimmy Carter signed the measure into law in 1978, the Council on Environmental Quality has made just one substantive amendment to related regulations—in 1986, according to the White House.

On average, it takes five years to complete an environmental impact statement for a project, and seven years for highways.

“The United States will not be able to compete and prosper in the 21st century if we continue to allow a broken and outdated bureaucratic system to hold us back from building what we need. The roads, airports, schools, everything,” Trump said, adding:

Right now it takes over seven years and oftentimes much longer—seven years is like record time—to complete approvals for a simple highway, the simplest of them. With today’s proposed reforms, we will reduce that number by more than 70%. We’ll cut the federal permitting timeline for major projects down to two years, and ideally we’re going to try to get even less than that.

The proposed rule would set time limits of no more than two years for the federal government to complete environmental impact statements and one year for completing an environmental assessment.

“The administration’s proposed reforms of the NEPA target some of the worst regulatory barriers that inflate the costs of repairing the nation’s roads, bridges, airports, and railways,” said Diane Katz, senior fellow in regulatory policy at The Heritage Foundation, adding:

The streamlining provisions, if enacted, would reduce project delays and expedite the benefits of modern—and safer—infrastructure. In fact, the [law] is entirely out of sync with current environmental, political, social, and economic realities, and outright repeal would not make a whit of difference to the environment or public health.

The proposed rule also is designed to promote information sharing between or among federal agencies, allowing one agency to use the determinations of another to avoid duplicative work. Primarily, the Environmental Protection Agency and the Transportation Department are involved in environmental reviews.

Each federal agency adopts its own procedures under the law. If the agency’s assessment determines a project will have significant environmental effect, it must do a more detailed environmental impact statement.

The statement requires a multistage effort that includes collaboration between the federal agency and the public. Next is a public review process for the draft statement lasting a minimum of 45 days.