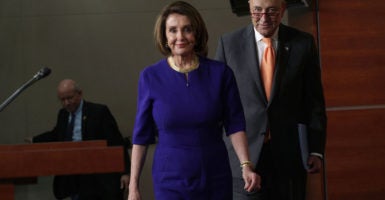 The evil Iranian regime is a clear and threatening global danger, and Soleimani was its most powerful general. How can there not be unreserved joy at his elimination But Senate Minority Leader Chuck Schumer, House Speaker Nancy Pelosi and others of their party are not joyful. (Photo: Alex Wong/Getty Images)

The muted reaction of leading Democratic politicians to the elimination of Iranian Maj. Gen. Qassim Suleimani reinforces my sense of what divides our country and differentiates the two parties.

One part of America still believes that there is good and evil, and one part doesn’t.

The American left, whose political home is the Democratic Party, lives in a world where good and evil don’t exist. Everything is about politics including redemption itself.

Only someone who does not believe there is good and evil experiences no joy when evil is defeated.

The destruction of Suleimani, whose life’s work was carrying out the will of a despicable regime, is cause for celebration. As commander of the Quds Force, his hands dripped with the blood of hundreds of Americans, and hundreds of thousands of others throughout the Middle East, particularly in Syria.

According to authoritative reports, the Iranian ideological imperialism extends to managing terrorist forces in Lebanon, Iraq, Afghanistan, Pakistan and Yemen. And much of their activity focuses on threatening the existence of Israel.

This network of terror has spread to our own hemisphere in South America.

In 1994, a bomb was detonated at the AMIA Jewish community center in Buenos Aires, Argentina, killing 85 and injuring 300. In 2006, Argentinian special prosecutor Alberto Nisman indicted eight former Iranian officials accused of being responsible for the operation, and the following year, Interpol issued “red notices” for the arrest of six of them.

The Wall Street Journal has reported Iranian activities in Venezuela, Bolivia, Nicaragua, Brazil, Peru and Chile. According to Joseph Humire, executive director of the Center for a Secure Free Society in Washington, D.C., “Latin America is arguably Iran’s top foreign policy priority outside of the Middle East.”

The evil Iranian regime is a clear and threatening global danger, and Soleimani was its most powerful general. How can there not be unreserved joy at his elimination?

But Senate Minority Leader Chuck Schumer, House Speaker Nancy Pelosi and others of their party are not joyful. As was the case when ISIS leader Abu Bakr al-Baghdadi was eliminated, instead of celebrating, they are attacking President Donald Trump.

No one wants war. And no one believes that the United States should expend its resources being the world’s policeman.

But refusal to recognize the threat of aggressive evil is irresponsible and dangerous.

In March 1983, then-President Ronald Reagan addressed the National Association of Evangelicals and delivered the famous address in which he called the Soviet Union “an evil empire.”

Reagan unleashed his passion, noting the standing threat from the Soviet communists, arguing for aggressive confrontation.

“There is sin and evil in the world,” said the president, “and we are enjoined by scripture and the Lord Jesus to oppose it with all our might.”

“(I)f history teaches anything,” he continued, “it teaches: Simple-minded appeasement or wishful thinking about our adversaries is folly. It means the betrayal of our past, the squandering of our freedom.”

Reagan stood tough, and not many years later, the unthinkable happened. The Soviet Union collapsed.

Some of the foolishness we are hearing from the left cynically suggests that this operation was a diversionary tactic by Trump to take attention from the impeachment proceedings.

Let’s recall what he said three years ago in his inaugural address: “We will reinforce old alliances and form new ones — and unite the civilized world against radical Islamic terrorism, which we will eradicate completely from the face of the Earth.”

Trump is focused and consistent with his agenda — rebuilding a strong, creative and safe America.

Despite Iran being among the most oil-rich nations in the world, the average per capita income of its citizens is a paltry $5,400. Rather than investing to develop the potential of their own country, they squander their wealth to terrorize the world. No one suffers more than Iran’s own citizens.

We should celebrate this blow to the regime in Iran and this timely, courageous act of Trump.