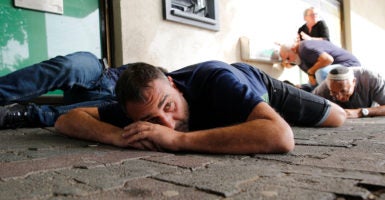 Israelis in Ashkelon take cover during a rocket attack from the neighboring Gaza Strip on Nov. 13, 2019. (Photo: Gil Cohen-Magen/AFP via Getty Images)

Madison Crawley is a member of the Young Leaders Program at The Heritage Foundation.

In American academia, a “safe space” is an environment in which a person or an identity group can seek “shelter” from being exposed to perceived criticism, harassment, or emotional harm.

But in Israel, a country the size of New Jersey, the term “safe space” has an entirely different meaning.

Israelis live in constant fear of missile attacks. Every child living near the southern border of Israel, a short distance from Gaza, is taught to be aware of the closest bomb shelter.

In Sderot, which is less than a mile from Gaza and has been a regular target of Qassam rocket attacks from the Gaza Strip, there’s a special playground built to be more than just a gathering place for recreation. It’s a massive “caterpillar” designed as a bomb shelter so that Israeli children can play in peace, without having to worry about how to reach the nearest safe house.

While Israeli children find comfort in a concrete caterpillar, many Americans say they feel “unsafe” on their college campuses, even in the absence of physical attacks. The latter debate the importance of their psychological safety.

In Israel, though, both physical and psychological safety are at risk every day.

Another of the several towns on Israel’s southern border is Dorot. For a visiting American, experiencing a community that lives in constant fear of missile attacks is hard to comprehend. The feeling of safety is considered a right by many Americans, but in Israel, regrettably, it’s a luxury.

Residents of Dorot strive to stay within a short distance of the nearest bomb shelter. The safest space there is a concrete box with walls 12 inches thick.

Meanwhile, a border wall is all that prevents random attacks by Palestinian militants.

Beyond the wall, there are active Hamas outposts that watch those living on the southern border using cameras and maintaining 24-hour surveillance over towns such as Dorot. It’s a way for Hamas militants to try to unsettle Israelis living near the barrier.

When you look toward the Gaza Strip, you can see its skyline and hear gunshots.

Despite the violence, a colorful mosaic covers the wall, highlighting Israel’s desire for peace. A local woman decorates the wall with painted rocks, spelling out “Path to Peace” in both English and Hebrew.

She hopes to show that while those within Gaza see the Israelis as enemies, both are suffering from the realities of war.

So, while many Americans continue to try to establish safe spaces to insulate themselves from those who might have different opinions, Israelis living under the threat of missile attacks reach out to their adversaries.

>>> What Makes Israel Such a Valuable Partner to the U.S.

“The community was joyful, but not in an ignorant way,” a fellow American visitor reflected after leaving Dorot.

“They understood the constant threat, but they knew why they chose to stay and how to alter their everyday life to compensate for that,” she said, adding: “The bomb shelters are integrated into the layout of the town.”

An Israeli tour guide named Raz warned that at any point, the air raid sirens could blare, forcing us to seek safety in one of the many shelters.

Those within the tour group were fearful as they struggled to process the notion of living in this seemingly dystopian world. Raz led the group into the community center, and as he spoke with the visitors, they were reminded that even this space doubled as a shelter.

At first glance, Dorot seems like any other city. But on closer inspection, the small shedlike outposts that dot the landscape are in fact bomb shelters, and the schoolyard is protected with a concrete awning.

“From a distance, they look more like artworks, with each shelter covered in beautiful paintings decorated by those living in Dorot,” the American visitor said.

Those in American higher education who push for creation of psychological “safe spaces” could learn a thing or two by touring the towns of southern Israel.