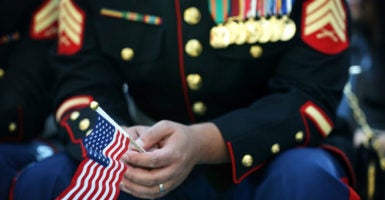 Gen. Paul X. Kelley, the 28th commandant of the Marine Corps, had a distinguished and impactful career, serving the United States in the Marine Corps for 37 years. Pictured: A Marine holds a flag during a naturalization ceremony Nov. 10, 2014, at the National Museum of the Marine Corps in Triangle, Virginia. (Photo: Alex Wong/Getty Images)

A patriot and a Marine, he was a combat veteran and oversaw the Marine Corps during a critical period of tragedy and rebuilding.

Kelley, born in Boston in 1928, graduated from Villanova University. Commissioned in 1950 after completing Basic School at Quantico, Virginia, Kelley had a distinguished and impactful career, serving the United States in the Marine Corps for 37 years.

We should honor Gen. Kelley’s lifetime of service to the Corps and to the nation. From his service in Vietnam, to leading our Corps through the Beirut bombing aftermath, Gen. Kelley served with honor and distinction.

Kelley began his career in the infantry. In Vietnam, he served as an intelligence officer before earning a promotion to commander of a battalion. During his tour as battalion commander in 1965, he earned the Silver Star, the Legion of Merit, and two Bronze Stars.

In 1970, he was reassigned to Vietnam in command of the 1st Marine Regiment, 1st Marine Division, notably the last Marine ground combat unit to leave Vietnam. He earned a second Legion of Merit during this deployment.

Under President Jimmy Carter in 1980, Kelley also commanded the Rapid Deployment Joint Task Force, the organization that evolved into U.S. Central Command and served as a rapid-deployment force for the Middle East.

He was promoted to general and commandant in 1983 during President Ronald Reagan’s first term, and oversaw the growth and improvement of the Marine Corps following the drawdown after the Vietnam War.

This growth and improvement allowed the Marines to play key roles in the decade following and beyond, including in the Persian Gulf War and in peacekeeping and disaster response missions around the world.

He also displayed strong leadership in the aftermath of the 1983 Marine barracks bombing in Beirut, which occurred early in his tenure as commandant and took the lives of 241 U.S. service members, 220 of them Marines. It was the worst single-day loss suffered by the Marines since World War II.

Kelley flew quickly to the site to give comfort to his fellow Marines and other survivors of the attack.

An outspoken advocate for a strong national defense throughout his career, Kelley criticized members of Congress “who believe defense can be had ‘on the cheap’” in an interview with the Christian Science Monitor as he neared retirement.

We should all honor Gen. Paul X. Kelley for his service and for his legacy of defending America and the principles he leaves behind.