Anti-Trump Christians, Would You Prefer a President Who Supports Secular Social Agenda? 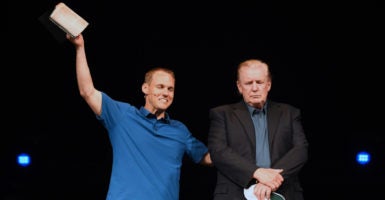 The latest dustup occurred after the departing editor of Christianity Today magazine, Mark Galli, wrote an editorial in which he said President Donald Trump is an immoral man and his impeachment by the House is cause for his immediate removal from office.

This ignited a firestorm.

During the debate over slavery in America, pro- and anti-slavery clergy selectively quoted Scripture to President Abraham Lincoln to justify their positions. Lincoln responded to the contradictory arguments of North and South in his second inaugural address: “Both read the same Bible and pray to the same God; and each invokes His aid against the other.”

Scripture, which conservative evangelicals claim is inerrant and infallible, contains stories of leaders with severe moral flaws, whom God used for His own purposes. Those who want President Donald Trump removed from office and can’t wait until the next election for voters to decide, ignore one of the most profound verses about temporal power: “Everyone must submit to governing authorities. For all authority comes from God, and those in positions of authority have been placed there by God.” (Romans 13:1 NLT)

If “everyone” and “all” doesn’t mean everyone and all, including people for whom some evangelicals did not vote, pray tell what does it mean?

Galli and other anti-Trumpers don’t tell us their presidential preferences. One hopes it isn’t any of those on the far left who have an agenda that evangelicals would consider an abomination. Trump is right when he says he has done more to advance evangelical concerns than any other president.

What the anti-Trump forces are uncomfortable with are the resumes of people who voted for and still support the president. They are not part of the elites. They didn’t go to the “right” universities, where truth is subjective—if it exists at all. They don’t read The New York Times, or The Washington Post, or watch CNN and MSNBC. They watch Fox News and listen to Rush Limbaugh.

They are tired of being treated like second-class citizens who don’t deserve to have their principles upheld by a government to which they pay taxes.

I recently spoke about the Galli editorial with a former Democratic member of Congress, who is a Christian. He said one of the problems with uncritical evangelical support for the president is that it dilutes their “witness” to non-believers, who think faith in God means having to join the Republican Party and support the president.

What would their position have been had Hillary Clinton, a liberal Methodist, been elected president? Do they believe they would have been in a better position to share their faith?

People have always used such excuses for not pursuing faith, but my friend does have a point. When non-churchgoers (who are increasing in numbers, especially among the young) see people they think should be preaching about another kingdom and another King selectively ignore a leader’s moral failings, they justify their unbelief.

On the other hand, anti-Trump Christians must answer this question: Would they be happier if a liberal Democrat were president, one who supports abortion and the rest of the secular-progressive social agenda and sees the Constitution as a “living document” to be interpreted by individual judges? That was the choice in 2016.

The same choice is likely in November. Such a “preferred” Democrat might be morally upright and even attend church every Sunday.

Apparently, they forget we have already had such a president. His name is Jimmy Carter.