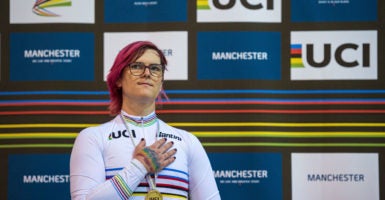 Now, lawmakers in three states—Washington, Tennessee, and Georgia—have proposed legislation that would place restrictions on transgender athletes in sports. Might legislation quell this new wave of transgender activism and make sports fair again?

The Tennessee Star reports that state Rep. Bruce Griffey, a Republican, proposed HB 1572, a bill that would “require elementary and secondary school student-athletes to compete in sports based on their biological sex at birth.”

The legislation stipulates that if Tennessee public schools violate this requirement, they would no longer be eligible to receive taxpayer subsidies from the state or a local government.

A district attorney can bring civil action against a state or local official who intentionally violates this act. The official would be subject to a $10,000 penalty, could be forced to vacate their position, and be barred from holding public office, school administration, or principal positions.

“We are seeing more and more transgender athletes competing and posting victories in traditionally gendered sports competitions, and doing so to the detriment of girls and women biologically born female,” Griffey said in a statement emailed to The Tennessee Star.

The proposed bill that would affect Georgia’s residents is slightly different. The Georgia Recorder reported state Rep. Philip Singleton, a Republican, proposed legislation that would prohibit people of different biological sexes from competition in Georgia athletic events that are exclusively for males or females.

The bill would also “ban sports teams from using public facilities if transgender children are competing in single-sex events that differ from their biological sex assigned at birth.”

The legislation would only apply to schools that have a policy separating male and female athletes.

The Georgia High School Association already does not allow students born male to play on female teams, and female students can only play on a male team if the school doesn’t have a female team for that sport.

According to KEPR-TV,  state Rep. Brad Klippert, a Republican, proposed legislation that would prohibit athletes born male from competing “with and against female students in athletic activities.”

House Bill 2201 focuses on women’s equality, and applies to sports where there are separate classifications for male and female athletes and sports that have individual, female competitors, such as swimming or track.

Transgender athletes in sports—biological men vying to compete as a woman in a women’s race—have affected all levels of the sports world this year, from high school and college to amateur and even professional sports.

For the second year in a row, Rachel McKinnon, a cyclist born male and who identifies as a transgender woman, won the Masters Track Cycling World Championships in the female 35-39 sprint category in England.

Selina Soule, a female high school track athlete, challenged Connecticut’s policy of allowing athletes to compete in sports based on their gender identity instead of biological identity with a lawsuit after Selina lost an important qualifying race to two male athletes who identified as females.

These pieces of legislation will undoubtedly be controversial because the nature of the bills addresses not just transgender people in sports, but gender identity in general.

The bills suggest that a male who identifies as female is not actually female and thus does not qualify to compete as one.

While this might seem like common sense to some people, it is now often resoundingly offensive to the LGBT community because many believe gender is a social construct, and therefore fluid.

Given the events of this year, some structure in the arena of sports and gender identity is certainly necessary, and legislation like this could provide that. It could also force the issue to be dealt with on a cultural level, requiring both sides to engage in the now-contentious debate over what gender identity really means, how it affects females in sports, and whether Title IX would be abused without this kind of legislation.