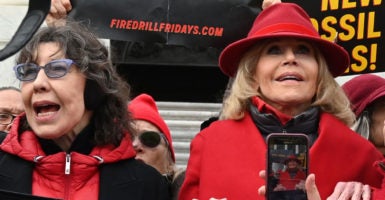 Actresses and activists Lily Tomlin (left) and Jane Fonda hold hands as they lead a climate protest on the steps of the U.S. Capitol in Washington, D.C., Dec. 27. (Photo: Eva Hambach/AFP/Getty Images)

The environmental zealots who regularly take to the streets of the nation’s capital for climate change protests clearly have never read Dale Carnegie’s classic self-help bestseller “How to Win Friends and Influence People.”

Causing motorists to be late for work and/or miss appointments is hardly the way to win friends among those they’ve seriously inconvenienced or to influence them to buy into the climate-calamity hysteria. It’s far more likely to alienate them.

For more than seven hours on Dec. 6, for example, hundreds of “Shut Down DC” coalition environmental activist demonstrators lived up to their billing, snaking through downtown Washington, blocking intersections with their bodies, banners, and other props, and forcing traffic to be diverted and detoured.

What the amorphous “climate justice” they “want now” entails is anyone’s guess, but it presumably tracks closely along the lines of the radical multitrillion-dollar Green New Deal scheme hatched by far-left freshman Rep. Alexandria Ocasio-Cortez, D.-N.Y.

This much is certain, however: The enormous taxes and spending the Green New Deal would mandate would do a grave injustice to the nation’s economic climate.

According to news accounts, the demonstration in early December began at about 7:30 a.m. with a march from George Washington University to World Bank headquarters along Pennsylvania Avenue Northwest, with gridlock ensuing at the height of the morning rush.

Later in the day, for two hours, seven of the protesters reportedly chained themselves to the door of a Wells Fargo bank branch, preventing customers from entering. Cheered on by octogenarian actress Jane Fonda—a longtime agitator who never met a leftist cause she didn’t reflexively support—demonstrators mindlessly chanted, “Wells Fargo, hey, you! / We deserve a future, too.” (Just as an aside, what’s with the left’s obsession with rhyming couplets?)

The bank, presumably targeted for supposedly helping finance the fossil fuel industry, should sue them all for restraint of trade.

When all was said/chanted and done, The Washington Post reported, “Despite hours of disruptions and tense moments between protesters and D.C. police, officials said no arrests were made.”

How is that even possible? Why does the city blithely allow these protests to disrupt traffic and inconvenience motorists and pedestrians, as well as businesses and their employees and customers? At minimum, why weren’t the most disruptive and unruly among the protesters not fined and/or arrested?

These protests, organized by groups with names like Extinction Rebellion, surely cost the city thousands of dollars for policing and security, so District of Columbia taxpayers are in effect subsidizing them.

There was no indication, however, that that seems to faze the ultraliberal city’s officials, many of whom no doubt support the protesters and their cause. Did either D.C. Mayor Muriel Bowser or D.C. Police Chief Peter Newsham issue to police a stand-down order? One has to wonder, inasmuch as 32 people were arrested during a similar protest on Sept. 23.

Regardless, do these climate change extremists really think they’re winning “hearts and minds” to their cause by grossly inconveniencing commuters, businesses, and others? To the contrary, one would reasonably expect they’re having the exact opposite effect, turning off those who aren’t already global warming “true believers.”

In the demonstrators’ self-righteous view, the end justifies the means, even if it’s counterproductive in terms of public relations. They went so far as to insist to those who complained of the inconvenience: “We’re doing this for you. It’s your planet, too.”

But this smug notion—“It’s for your own good”—is belied by a January poll conducted by the Energy Policy Institute at the University of Chicago and The Associated Press-NORC Center for Public Affairs Research. It found that 68% of respondents oppose paying an additional $10 a month to combat climate change, while 43% aren’t even willing to pay an extra $1 a month on their electricity bills for that purpose.

More telling, the poll failed to include any mention of how much warming supposedly would be abated by paying an additional $1, $20, or $50 per month. In each scenario, the answer is next to nothing, and that would only decrease even further their willingness to pay such a tax.

Another irony, lost on these climate change Chicken Littles, was that the traffic tie-ups they caused resulted in long lines of cars idling, spewing more—not less—of the tailpipe carbon emissions they claim are contributing to the supposed impending climate catastrophe.

On its website, Shut Down DC insists that there’s “no time left for business-as-usual,” but regardless of how righteous the protesters consider their cause to be, D.C. officials and police need to remind them, forcefully, that the right to swing one’s fist ends where someone else’s nose begins.