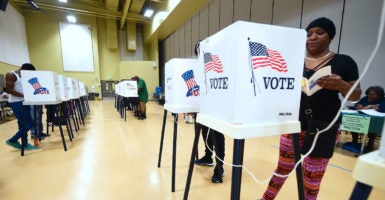 How many people who fall for these claims understand that both federal law and state law mandate the updating of voter lists? Pictured: Voters make their choices in the gymnasium of the Barack Obama Prep Academy in Los Angeles on Nov. 6, 2018. (Photo: Frederic J. Brown/AFP/Getty Images)

The chilling piece warns readers that “hundreds of thousands of voters are set to be purged in two key swing states,” which “potentially” gives Republicans “a crucial advantage by shrinking the electorate” in those states.

None of this, of course, is true. Cynical pieces of this genre, an election-time tradition at this point, only allow Democrats to warn of widespread disenfranchisement and preemptively give aggrieved Democrats such as Stacey Abrams a baked-in excuse for losing elections and smearing Republicans.

How many people who fall for these claims understand that both federal law and state law mandate the updating of voter lists?

In Georgia, we already know that hundreds of thousands of “voters” were not purged, because at least 62% of registrations that were canceled recently by the state had surely moved away or died. Either their mail was returned as undeliverable or they had officially changed their address to a different state.

Other registrations were purged because the person hadn’t voted in years. Georgia has automatic registration. I know it’s difficult for some people to believe this, but lots of Americans have no interest in voting.

And Georgia voters can be declared “inactive” if they haven’t participated in elections, contacted officials, responded to officials, or updated their registrations since the 2012 election.

That’s state law. Georgia sends everyone letters explaining how they can fix any potential problems. Georgia, in fact, publishes a list of names online so anyone who has not received a letter can check if they are still registered. Gov. Brian Kemp recently signed a law that lengthens the period before voters become “inactive” from three to nine years.

As Justin Gray, a reporter in Atlanta, notes, the reason you don’t hear complaints from these “hundreds of thousands” of disenfranchised voters is because “most on [the] list are either dead, have moved, or as some told me were registered automatically when they got [a] license and don’t ever want to vote.”

It’s important to note, as well, that despite what you’ve heard, and what Democrats are constantly intimating, an analysis by the Atlanta Journal-Constitution uncovered no racial disparities in the voter roll purge in Georgia, finding that blacks and whites were purged in proportion to their shares of the state’s registered voters:

Georgia’s fortunes mirror a national trend. According to the Census Bureau, black turnout nationally grew around 27% in 2018. A Pew Research Center study found that “all major racial and ethnic groups saw historic jumps in voter turnout.”

Much the same goes for Wisconsin, where the Wisconsin Elections Commission decided this summer to simply ignore the state law. A judge just reversed that decision and ordered the state to purge over 200,000 voter registrations.

Most of those registrations are also people who have almost surely moved—the state uses the reliable Electronic Registration Information Center, which reports on voters who make official government transactions from an address different than their voter registration.

Then again, even if a voter in Wisconsin is somehow inhibited by the system, the state also features same-day voter registration.

However you look at these situations, though, “hundreds of thousands of voters” are not losing their right to cast ballots. Even if judges began forcing Wisconsin and Georgia—and the seven other states with “use it or lose it laws”—to ignore the law, there’s no evidence that it would have any bearing on the election.

Not in Georgia. Not in Wisconsin. Not anywhere.

None of this is to contend that there isn’t a single person in the country who is being unfairly denied the right to vote. But the notion that “hundreds of thousands of voters” will be stopped from participating in the 2020 election through voter purges is nothing but destructive scaremongering meant to undermine American belief in the veracity of our elections.