Tucker Carlson’s False and Misleading Claims About The Heritage Foundation 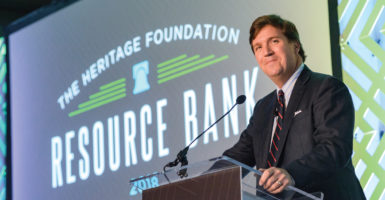 For nearly 50 years, The Heritage Foundation has represented the interests of the American people based on the principles of free enterprise, limited government, individual freedom, traditional values, and a strong national defense. Heritage does not support policies that deviate from these principles, nor are our recommendations ever influenced by donations or outside political pressure.

It was, therefore, incredibly disappointing to hear Tucker Carlson, whom we hold in high regard, mislead his viewers about Heritage’s work on the topics of big tech and censorship. Carlson is a former employee of Heritage who last year received our prestigious Salvatori Prize and who regularly features Heritage experts as guests on his Fox News program. In other words, he knows Heritage, our people, and our principles.

Unfortunately, Carlson did not contact Heritage in advance of his segment or provide Heritage with an opportunity to respond to his accusations. Rather than engage in a substantive policy debate, he chose instead to make ad hominem attacks and question our integrity. We are disappointed this came from someone whom we admire and respect.

The Heritage Foundation will not let these attacks go unanswered and we welcome the opportunity to have a substantive debate on public policy.

Carlson’s claims began with an attack on a recent Heritage report about Section 230 of the Communications Decency Act. He claimed the report’s author repeated lines verbatim from a trade association. This is false. In fact, the 13-page Heritage report contained 22 footnotes, all of which were properly quoted and attributed to sources. The report went through a thorough and lengthy process of vetting and review by Heritage scholars to ensure accuracy and agreement among all Heritage analysts involved in technology and social media policy.

The conclusions of Heritage’s report were based on the principles that guide all of our policy recommendations—principles Carlson seems curiously less interested in defending. Instead, he made an unfounded assertion against Heritage and outrageous smear of one of our scholars. It is disappointing that Carlson would deceive his viewers with such patently false information.

It should come as no surprise that Heritage supports empowering consumers rather than government. We are, and have always been, champions of the free market and critics of government intervention. That’s why we are forcefully pushing back on the few outspoken individuals who seem to prefer an expedient answer rather than a principled solution.

Carlson also failed to acknowledge Heritage experts’ consistent criticism of technology companies, including Google’s decision to withdraw from the Department of Defense’s Project Maven and its work with communist China on a censored search engine.

He apparently missed Heritage President Kay C. James’ Washington Post op-ed blasting Google for caving to the radical left and disbanding its AI board simply because she, a prominent conservative leader, was asked to join it.

And he made no mention of Google-owned YouTube censoring a video produced by The Daily Signal, Heritage’s multimedia news outlet. On our public platforms and in a private meeting with YouTube’s CEO, we made our position abundantly clear: We will not tolerate this type of censorship and will stand side by side with other conservatives experiencing similar challenges.

Heritage and its team of dedicated scholars are committed to pursuing public policies that make life better for all Americans. Heritage is the largest public policy organization in America, with more than 500,000 members, and has the No. 1 ranking from the University of Pennsylvania for impact on public policy.

The Heritage Foundation won’t be intimidated or bullied as we continue to represent the interests of conservatives and all Americans.