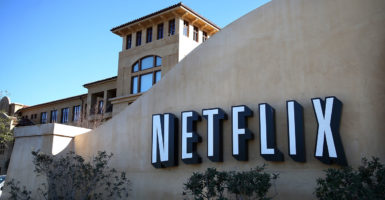 More than 2 million people signed a petition demanding that the film “The First Temptation of Christ” be removed from Netflix. Pictured: The Netflix headquarters in Los Gatos, California, Jan. 22, 2014. (Photo: Justin Sullivan/Getty Images)

Netflix refuses to comment on outrage from Christians over a “holiday special” portraying Jesus Christ as gay.

More than 2 million people signed a petition against “The First Temptation of Christ,” a reportedly satirical representation of Jesus, his mother Mary, and his father Joseph created by the comedy group Porta dos Fundos and produced in Brazil.

The comedy group created the movie following its International Emmy Award-winning production of “The Last Hangover,” a movie which satirizes the biblical Last Supper, the last meal Jesus shared with his disciples before he was crucified.

“The First Temptation of Christ” portrays Jesus returning home for his birthday party with a friend named Orlando, according to the New York Daily News. The publication reports that Orlando continuously hints in the film that he and Jesus are more than friends.

As of 1 p.m. Wednesday, more than 2.1 million people had signed a Change.org petition demanding that the film be removed from Netflix and saying that the film “seriously offended Christians.”

“Porta Dos Fundos was founded on making people laugh through satire on diverse cultural themes in our society,” Porta dos Fundos said in a statement provided to The Daily Caller News Foundation. “We firmly believe that freedom of expression not only speaks to artistic freedom but is essential to a flourishing democratic country.”

Hallmark first pulled the ads after the group One Million Moms petitioned Hallmark to “please reconsider airing commercials with same-sex couples.” But the group apologized Sunday following outrage from LGBTQ groups, saying, “This was the wrong decision.”

Netflix weighed in on the dispute by suggesting titles on Netflix showing lesbians “joyfully existing.”