How Beijing Controls Chinese Citizens Through Family, Education, and Speech 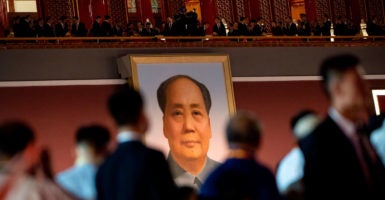 A giant portrait of former Chinese Communist Party leader Mao Zedong dominates Tiananmen Square in Beijing during an Oct. 1 gala to mark the 70th anniversary of the founding of the People's Republic of China. (Photo: Noel Celis/AFP via Getty Images)

Paul Mossiman is a graduate of the Young Leaders Program at The Heritage Foundation.

You may have read about China’s practice of foot-binding. It’s an ancient custom dating back to the supposedly pleasing aesthetic sense of the 10th century.

To improve their marriage prospects, women would bind their feet with bandages from an early age to stunt the growth of them.

The tradition was damaging to the development of the body, yet was accepted and practiced. Fortunately, the practice has since been condemned and discontinued.

But communist China has adopted other methods of suppressing the growth of the individual by attacking three bedrock institutions of society; namely, the family, the school, and free speech.

In 1980, communist China announced a “one child” policy to prevent a population “crisis.” Chinese families were limited to only one child or faced severe penalties. The punishments included heavy fines, forced sterilizations, forced abortions, or even infanticide.

Throughout the 35 years of the one-child policy, there were a recorded 196 million sterilizations and 336 million abortions. (That 336 million figure is greater than the entire population of the United States.)

Since 2015, communist China has amended the policy to allow another baby to be born without the Chinese Communist Party intervening. The abortion rate, however, remains above 24.2 for every 1,000 babies born.

Communist China also controls the populace through its school system. The Communist Party has complete power over education, so much so that school principals are either members of the party or operate under the direction of a party member.

This close monitoring of schools allows communist China to indoctrinate children at a young age into Communist Party propaganda.

The curriculum is so strict that students fear speaking out of line. They “learn” to parrot Chinese Communist Party guidelines as gospel.

As if to underscore the point, the founder of a communist grade school in Henan stated in an interview: “Maoist thought is God.”

Chu says that the government explicitly bans “discussion of democracy, freedom of speech, and past mistakes of the Communist Party.” Other bans include Google, Facebook, Instagram, The Wall Street Journal, and The Economist.

There seems to be no limits to the censorship. Both “South Park” cartoons and “Winnie the Pooh” children’s stories are forbidden—the former for criticizing the Chinese government; the latter for vaguely resembling President Xi Jinping.

Nothing seems to lie outside the Communist Party’s grasp. Suppression has become oppression.

Yet, in Hong Kong, the people demonstrate.

The demonstrations forced the government of Hong Kong to take a full-page advertisement in The Wall Street Journal proclaiming that Hong Kong remains a “free society.” It lists nine different freedoms, ranging from freedom of speech and freedom of the press to freedom of religious belief.

Hong Kong may comfort itself with ads, and it might comfort others. But the truth is that its freedoms are under serious threat.

It’s under threat from the communist government in Beijing, which is worried and weak, and whose tools of oppression will not work in Hong Kong the way they worked 30 years ago in Tiananmen Square.

Beijing is reduced to hoping that Hong Kongers eventually will tire of their protests. That’s a baseless hope, however, because it doesn’t recognize the innate desire for freedom that exists within every human being and inspires the brave people of Hong Kong to demonstrate until their city is fully free.