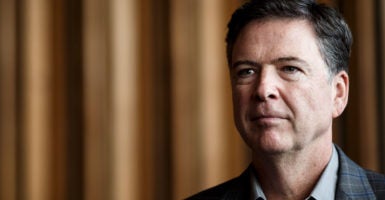 “The idea that this was seven layers below him is simply not true,” Attorney General William Barr says of James Comey, later calling the former FBI director defense "nonsense." Pictured: Comey talks backstage June 19, 2018, before a discussion about his book in Berlin, Germany. (Photo: Carsten Koall/Getty Images)

Attorney General William Barr hit back in an interview at James Comey over the former FBI director’s attempts to downplay his role in Crossfire Hurricane, the FBI’s counterintelligence investigation of the Trump campaign.

In an interview Wednesday with Fox News Channel, Barr disputed Comey’s claim in a “Fox News Sunday” interview that the FBI investigation was run “seven layers” below him.

“The idea that this was seven layers below him is simply not true,” Barr told Fox’s Martha MacCallum in the interview, later calling Comey’s defense “nonsense.”

“I think that one of the problems with what happened was precisely that they pulled the investigation up to the executive floors, and it was run and bird-dogged by a very small group of very high-level officials,” he said.

Barr and Comey both were responding to the Justice Department inspector general’s report that found “significant inaccuracies” in the FBI’s applications for warrants to surveil Carter Page, then a Trump campaign adviser.

The report also said Comey was involved in plans to open Crossfire Hurricane and that he reviewed the initial Page FISA application. FBI agents updated Comey on the status of the investigation every two to four weeks, the report said.

The Foreign Intelligence Surveillance Court, which approved the FBI’s four applications to surveil Page, excoriated the bureau in an order released Tuesday for providing “false” and “misleading” information to assert that Page was an agent of Russia.

Comey acknowledged in his interview Sunday that he was “wrong” to have previously asserted that the FBI did nothing wrong during the surveillance process.

The former FBI director also tried to downplay the IG’s findings. He chalked up the errors to “sloppiness” on the part of the FBI. He accepted some responsibility for the errors but ultimately pinned them on career FBI agents who carried out the day-to-day activities of the investigation.

Barr took another jab at Comey for whitewashing his role in the investigation.

“I think leaders have to own their decisions and are fair game if they make bad decisions,” the attorney general said in the Fox interview.

Barr also said he objects to allegations from Comey and others that his criticisms over the FBI’s handling of the Trump-Russia probe constitute an attack on the bureau itself.

“One of the things I object to is the tack being taken by Comey, which is to suggest that people who are criticizing or are trying to get to the bottom of the misconduct are somehow attacking the FBI,” Barr said. “I think that’s nonsense.”

“We’re criticizing and concerned about the misconduct of a few actors at the top of the FBI, and they should be criticized if they engaged in serious misconduct. That doesn’t mean that we’re criticizing the FBI,” he said.