The Invention of Hispanics 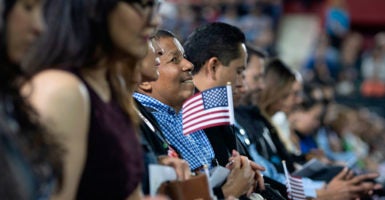 When the 1930 census classified “Mexican American” as a race, leaders of the community protested vehemently and had the classification changed back to "white" in the very next census. Pictured: A naturalization ceremony April 18 at El Paso County Coliseum in El Paso, Texas. (Photo: Paul Ratje/ AFP/Getty Images

America’s surging politics of victimhood and identitarian division did not emerge organically or inevitably, as many believe. Nor are these practices the result of irrepressible demands by minorities for recognition, or for redress of past wrongs, as we are constantly told.

Those explanations are myths, spread by the activists, intellectuals, and philanthropists who set out deliberately, beginning at midcentury, to redefine our country. Their goal was mass mobilization for political ends, and one of their earliest targets was the Mexican American community.

These activists strived purposefully to turn Americans of this community (who mostly resided in the Southwestern states) against their countrymen, teaching them first to see themselves as a racial minority and then to think of themselves as the core of a panethnic victim group of “Hispanics”—a fabricated term with no basis in ethnicity, culture, or race.

This transformation took effort—because many Mexican Americans had traditionally seen themselves as white. When the 1930 census classified “Mexican American” as a race, leaders of the community protested vehemently and had the classification changed back to “white” in the very next census.

The most prominent Mexican American organization at the time—the patriotic, pro-assimilationist League of United Latin American Citizens, or LULAC—complained that declassifying Mexicans as white had been an attempt to “discriminate between the Mexicans themselves and other members of the white race, when in truth and fact we are not only a part and parcel but as well the sum and substance of the white race.” Tracing their ancestry in part to the Spanish who conquered South and Central America, they regarded themselves as offshoots of white Europeans.

Such views may surprise readers today, but this was the way many Mexican Americans saw their race until midcentury.

They had the law on their side: A federal district court ruled in In Re Ricardo Rodríguez (1896) that Mexican Americans were to be considered white for the purposes of citizenship concerns.

And so as late as 1947, the judge in another federal case (Mendez v. Westminster) ruled that segregating Mexican American students in remedial schools in Orange County was unconstitutional because it represented social disadvantage, not racial discrimination. At that time, Mexican Americans were as white before the law as they were in their own estimation.

Half a century later, many Mexican Americans had been persuaded of a very different origin story. Among the persuaders-in-chief was Paul Ylvisaker, head of the Public Affairs Program at New York’s wealthy Ford Foundation during the 1950s and ’60s.

Though little known today, Ylvisaker wielded great power and influence to advance a particular vision of social justice inspired partly by socialism and its politics of resentment. Ylvisaker hoped, as he later put it in a 1991 essay, “The Future of Hispanic Nonprofits,” that Mexican Americans could be organized into a “united front.”

That concept, formulated in 1922 by the organization Communist International, implied a union of disparate groups on the left into what the Comintern’s 4th World Congress called “a common struggle to defend the immediate, basic interests of the working class against the bourgeoisie.”

Ylvisaker, who saw philanthropy as “the passing gear” of social change, set off to find out if something similar was possible with Mexican Americans. In 1968, he poured $2.2 million in seed funding into the Mexican American Legal Defense and Educational Fund, a national advocacy conglomerate whose headquarters still buzz with activity in Los Angeles today.

Ylvisaker built on foundations laid by the organizing guru Saul Alinsky, who had begun the effort to consolidate the Mexican American vote during Ed Roybal’s 1949 Los Angeles City Council election.

Roybal, an Army veteran and distant descendant of New Mexico’s Spanish settlers, was one of many Democrats at the time whose success in local politics owed much to Alinsky’s organizing tactics. Alinsky’s groups also trained men such as Herman Gallegos, Julian Samora, and Ernesto Galarza—Chicano Movement intellectuals who used Ylvisaker’s Ford Foundation money (starting with a one-year grant of $630,000) to found the interest group La Raza in 1968.

What all these radicals sought—and were quite successful at eventually achieving—was to analogize the experience of black Americans to that of Latinos. The term La Raza, literally “the race,” by itself epitomized this process of racialization.

Ylvisaker was direct on this point. In 1964 he handed UCLA researchers the then-goodly sum of $647,999 for a deep survey of Mexican Americans in the Southwest. One of the things he wanted this survey to find out was in what respect the Mexican American experience was comparable to that of “Negroes today.”