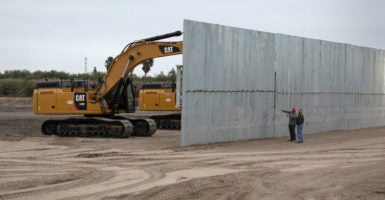 The nation’s acting homeland security secretary said Thursday that the $1.4 trillion spending package making its way through Congress will pay for an enormous amount of new barrier along the U.S.-Mexico border.

The House passed a $1.4 trillion spending package Tuesday with days to go before the federal government would enter a shutdown. Included in the legislation is $1.375 billion for border wall construction.

The package, which allots the same amount of funds as last year’s spending bill, also allows President Donald Trump to keep his authority to tap other government funds for wall construction.

The spending package “gets us about 70 miles of new border wall,” Wolf said Thursday on “Mornings with Maria” on the Fox Business Channel. “So combine that with the money we have in ’17, ’18, ’19, the money that we are using from [the Department of Defense] as well, and we’ve got significant amount of money to build significant amount of wall. So we’re anticipating by the end of 2020 that we have somewhere between 400 and 450 miles of new wall.”

The spending bill, which expires at midnight Friday, now heads to the Senate. Trump is expected to sign it when it reaches his desk.

In response to a question about Democratic opposition to wall spending, Wolf said that when he is down at the southern border, Border Patrol agents tell him that the wall is something they sorely need.

The barrier, as other immigration officials have noted, is more than just a wall, but also includes lighting, roads, and technology that assist Border Patrol agents in stopping illegal immigration and drug trafficking.

“What they’re saying is they need that border wall system to do their jobs day in and day out, so I fully support the president, the administration, and what we’re trying to do to get as many miles of that wall built as quickly as possible,” said Wolf, who began leading the Department of Homeland Security in November.

Construction of a border wall along the U.S.-Mexico border was Trump’s most lauded campaign goal during the 2016 presidential election, and it remains a top priority for his administration.

However, a steady stream of lawsuits from progressive and environmental organizations, Democrats’ opposition, and government red tape have proven difficult for progress. The Trump administration has remained determined to get more barriers built before the end of 2020.

Roughly 90 miles of new border wall has been built in place of “dilapidated and outdated designs” as of Dec. 6, according to U.S. Customs and Border Protection. The administration had hoped to hit 450 miles of new wall by the end of next year; however, immigration leaders have acknowledged the difficulty in reaching that goal.

“I think what’s startling are politicians and others who say the wall doesn’t work, and that’s just not true. That’s not the facts that we have,” Wolf said. “Where a wall goes up, the illegal border crossings, the apprehensions go down.”