The Right to Destroy Cities 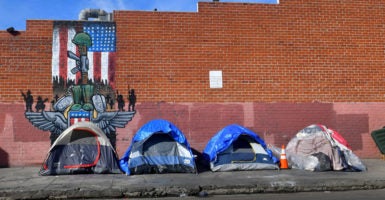 Tents for the homeless line a sidewalk in Los Angeles on Tuesday. The Supreme Court let stand a ruling by the 9th U.S. Circuit Court of Appeals, declining to hear an appeal that it should be a crime to camp and sleep in certain public spaces. (Photo: Frederic J. Brown/AFP/Getty Images)

This week, the Supreme Court effectively mandated continued legal tolerance for homelessness across major cities on the West Coast of the United States.

The 9th U.S. Circuit Court of Appeals recently ruled that Americans have a right to sleep on the streets, and that it amounts to “cruel and unusual punishment” under the Constitution to levy fines based on such behavior.

That court—a repository of stupidity and radicalism, the Mos Eisley of our nation’s federal bench—decided that writing a $25 ticket to people “camping” on the sidewalk is precisely the sort of brutality the Founding Fathers sought to prohibit in stopping torture under the Eighth Amendment.

That ruling was so patently insane that even liberal politicians such as Los Angeles County Supervisor Mark Ridley-Thomas joined the appeal attempt. “Letting the current law stand handicaps cities and counties from acting nimbly to aid those perishing on the streets, exacerbating unsafe and unhealthy conditions that negatively affect our most vulnerable residents,” he explained.

But the 9th Circuit ruling will stand. That ruling followed a separate 2006 ruling from the same court, which found that cities could not ban people from sleeping in public places. In this case, Judge Marsha Berzon, in language so twisted it would make yoga pioneer Bikram Choudhury jealous, wrote that “the state may not criminalize the state of being ‘homeless in public places'” and thus could not criminalize the “consequence” of being homeless.

It is worth noting that being homeless is not a “state” of being. It is not an immutable characteristic. It is an activity and can certainly be regulated.

That doesn’t mean the best solution is prosecution of those living on the street—a huge swath of homeless people are mentally ill or addicted to drugs and would benefit from better laws concerning involuntary commitment or mandatory drug rehabilitation. But to suggest that cities cannot do anything to effectively police those sleeping on the streets is to damn those cities to the spread of disease, the degradation of public spaces, and an increase in street crime.

Hilariously, Berzon contended that this 9th Circuit ruling would not mandate cities to provide full housing to the homeless; it would just prohibit them from moving or arresting the homeless for living on the streets. Which is somewhat like Tom Hagen telling Jack Woltz that while he doesn’t have to cast Johnny Fontane in his new war film, he can’t stop the Corleones from rearranging the family stable.

But here’s the problem: Cities that have attempted to provide increased housing for the homeless, despite some early successes, have seen their problems return.

Cities like Seattle and Los Angeles have attempted to build new housing. It’s been an expensive failure. It turns out that the carrot of housing must be accompanied by the stick of law enforcement. If you cannot compel drug addicts to enter treatment, or paranoid schizophrenics to take their medication, or those who refuse to live indoors to do so, homelessness will not abate.

As it is, the Supreme Court has damned America’s major cities to the continuation of the festering problem of homelessness. And that problem won’t be solved by judges who attempt to force social policy through deliberately misreading the Constitution, or who believe they are championing “freedom” for tens of thousands of Americans who are seriously mentally ill or addicted to drugs.