US to Commemorate 75th Anniversary of WWII Battle of Bulge 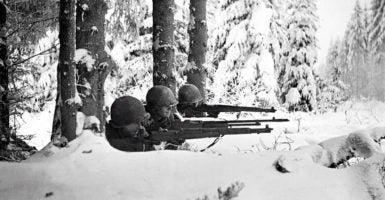 Three U.S. infantrymen in the snow during the Battle of the Bulge, Ardennes, Belgium, in January 1945. (Photo: Tony Vaccaro/Getty Images)

A parade was scheduled for the morning of Saturday, Dec. 16, 1944, for members of 1st Battalion, 109th Infantry Regiment, 28th Infantry Division in Diekirch, a small town in Luxembourg.

The division had been sent to the area for some welcome rest and refit after continuous fighting in the months since the D-Day invasion in June of that year.

“We did know that there had been rumblings of enemy artillery and that our battalion motor pool had been hit some time in the wee hours of the morning.  Nevertheless, Company B fell out for the parade about 0800,” he recalled, adding:

I was in charge, since the company commanding officer had been called to report to battalion headquarters. We soon got the word to forget the parade and get ready for action with full combat gear.

What Christy was hearing were the opening shots of the Battle of the Bulge, Nazi Germany dictator Adolf Hitler’s attempt to make a breakthrough in the Ardennes Forest in the closing months of World War II.

Hitler directed this attack in a last-ditch effort to try to divide the Allied armies. Some may not know what the “bulge” was in the Battle of the Bulge. The “Bulge” referred to the large pocket in the Allied lines that the German attack created with its advance.

Hitler stripped the Eastern Front and used other reserves to assemble an attacking force of some 30 divisions, including some of Germany’s best. Facing this force were a collection of recuperating and new U.S. Army divisions, some never tried in combat.

But through a series of mostly small-unit actions fought in dozens of towns and fields, U.S. troops and units conducted a heroic defense, slowing and eventually stopping the attack.

By Dec. 23, the United States started a series of counterattacks, eventually throwing the Germans back to their starting lines.

Thus, the story of the Battle of the Bulge is the story of many smaller battles, like the siege of Bastogne or the battles for St. Vith and Stavelot. Each contributed to the eventual defeat of the German assault.

On Dec. 16, a delegation of U.S. officials, designated by President Donald Trump, will visit the kingdom of Belgium and the grand duchy of Luxembourg to commemorate the 75th anniversary of the Battle of the Bulge and to honor the sacrifice and courage of the troops who fought there.

The delegation will be led by Secretary of Defense Mark Esper and will include Gen. Mark Milley, the chairman of the Joint Chiefs of Staff, and former Sen. Kay Bailey Hutchison, R-Texas, the U.S. permanent representative to NATO.

Following the opening of the attack on Dec. 16, Christy and the 109th Regimental Combat Team, and thousands of other troops, would fight in tough, brutally cold conditions to regain the initiative. By Christmas, it was clear the German attack had failed.

After a hot turkey dinner on Christmas, Christy remembered, “After eating, I remember very well everyone singing ‘Silent Night’ with the Germans joining in with their own version of ‘Stille Nacht.’ We were relieved Christmas night, but I will never forget how I spent Christmas Eve and Christmas Day of 1944.”

It’s appropriate that we honor their sacrifices by dispatching a senior delegation to salute the brave troops who fought back tenaciously in December 1944.

We should all keep such sacrifices in our memories.