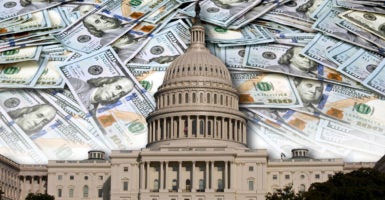 We can't pay off our increasing debt—unless we're willing to tell the government to stop stationing soldiers in 80 countries, stop sending checks to poor people and old people, and stop paying for "free" health care for people like me. (Photo illustration: Getty Images)

Congress and the media obsess endlessly over whether President Donald Trump should be impeached.

Both ignore $23 trillion of bigger problems.

That’s how deep in debt the federal government is now, and because government officials keep spending much more than they could ever hope to collect in taxes, that number will only go up. It’s increasing by $1 trillion a year.

“Shut up, Stossel,” you say. “You’ve been crying wolf about America’s debt for years, but we’re doing great!”

You have a point.

For many years, I’ve predicted that government, to fund freebies both parties want, would print boatloads of money. That would cause massive inflation. I bought silver coins so I might afford a loaf of bread while the rest of you haul suitcases full of nearly worthless paper currency to the bakery—or go hungry!

Thanks to Trump’s contempt for the “deep state’s” love of endless regulation, businesses are hiring and stock prices are up. America is doing great.

But while our budget deficits haven’t yet created a crisis, they will. You can stretch a rubber band farther and farther. Eventually, it will snap back—or break.

We can’t pay off our increasing debt—unless we’re willing to tell the government to stop stationing soldiers in 80 countries, stop sending checks to poor people and old people, and stop paying for “free” health care for people like me. If the government did stop, the public would revolt.

Social Security, Medicare, Medicaid, and other health care spending account for about half of the federal budget, and because we old people rudely refuse to die, these “entitlements” consistently grow faster than the tax revenues meant to fund them.

Anyone serious about giving our kids a future has to be willing to make big cuts to those programs, or at least privatize them and let individuals make our own decisions with our own money.

But good luck to any politician who proposes that.

By contrast, voters don’t get stirred up as we just quietly sink farther and farther into debt.

So politicians demand even more spending.

“With a Democratic House consumed with impeachment, there is very little appetite for the sorts of commonsense fiscal policies that could rein in our out-of-control deficits and debt,” Sen. Ted Cruz, R-Texas, says.

That implies that if Republicans were in charge, they would restore fiscal order. But there’s little evidence of that. Republicans talk about spending cuts and “responsibility,” but rarely cut anything.

Democrats want new social programs. Neither party wants to reduce the military budget. Trump wants his wall and tariffs. Farmers, once proud independent capitalists who criticized welfare, now get 40% of their income from the government.

No matter who you vote for and no matter what speeches they make, none of them are doing anything to put us on a sustainable course. It’s too bad.

Fortunately, thanks to the inventiveness of American entrepreneurs, our economy keeps creating new wealth for politicians to grab.

That might mean Congress wouldn’t have to cut spending for America to gradually grow our way out of this terrible debt. All they’d need to do is make sure spending goes up slower than the rate of inflation.

They won’t even do that.